On Warsaw visit, Merkel voices concerns over rule of law under Law and Justice party 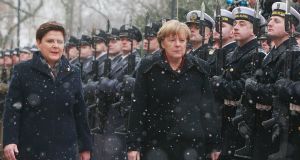 Poland’s prime minister, Beata Szydlo, and Angela Merkel review a guard of honour in Warsaw on Tuesday at the start of the German chancellor’s visit to Poland. Photo: AP/Czarek Sokolowski 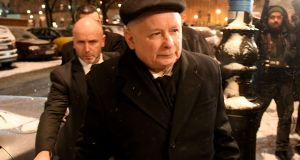 Poland’s national conservative government has emphasised its interest in a “close partnership” with Germany on European Union affairs, trade and defence.

After a bumpy year in bilateral relations, German chancellor Angela Merkel was greeted in Warsaw on Tuesday with military honours and light Warsaw snowfall by prime minister Beata Szydlo. Once out of the cold, the Polish leader ramped up the warmth in a joint press conference, strikingly a conciliatory tone that promised deeper co-operation while demanding member state-friendly EU reform

“We should be focused on bringing the European Union together, but with respect for and strengthening of nation states,” said Ms Szydlo of the ruling Law and Justice (PiS) party.

After a year of robust PiS rhetoric in her direction, Dr Merkel went along with her host’s warm welcome on Tuesday – to a point. After praising “intensive, dense talks”, the chancellor made a point of raising ongoing concerns over the rule of law under PiS. Of greatest concerns: government challenges to the independent judiciary, reform of public broadcasting and attempts to reframe the legacy of the Solidarity movement and its leaders.

“We know how important a pluralist society is, with an independent judiciary,” said Dr Merkel.

The German leader said she was “pleased to hear” Warsaw would respond soon to European Commission concerns over the consequences of refusing to publish constitutional court rulings at odds with government policy. This stand-off left Poland’s highest court paralysed and has allowed PiS to legislate effectively without judicial oversight.

Dr Merkel also made sure to express, diplomatically, her views on claims last week that Poland’s Solidarity leader Lech Walesa was a communist-era informer. Mr Walesa has dismissed the claim as false, the work of a politically motivated state agency. But PiS has embraced the claims, reviving its long-running campaign to undermine Mr Walesa’s legacy and the legitimacy of the Polish transition he steered from communism to democracy.

On Tuesday, Dr Merkel recalled how, growing up in East Germany, she had “always followed closely what happened in Poland”.

“Solidarity influenced my life,” said Dr Merkel. “Without it perhaps we wouldn’t have had the end of the Cold War and German unification.”

As for Ms Szydlo’s claim on Tuesday that German investors are “welcome” to invest in Poland, Dr Merkel knows to take that with a pinch of salt.

Since returning to office in November 2015, PiS has implemented a far-reaching economic reform plan with loudly nationalist mood music and regular swipes at foreign-owned companies, in particular German banks and media organisations.

But Warsaw’s conciliatory rhetoric to its largest neighbour was the strongest signal yet that PiS is anxious to keep its strategic options open with Berlin, given Britain’s EU departure and the Nato-critical, Russia-friendly noises from US president Donald Trump that have unsettled Poles.

And so, sensing a hand outstretched, the pragmatic German leader joined her Polish counterpart in accentuating the positive – in public at least. Though they were not in agreement on everything, Dr Merkel said Poland and Germany had “very similar views” on common European defence and Nato, EU energy issues and border security.

Amid pressure back in Germany over her refugee policy, Dr Merkel agreed with her Polish host that the EU must do more to “combat the causes of [refugee] flight” – Warsaw’s justification for refusing to take asylum seekers.

The two leaders spoke unisono in the direction of Moscow, that EU sanctions against Russia could not be lifted until completion of the Minsk Agreement to resolve the stand-off with Ukraine.

On Tuesday afternoon Dr Merkel held meetings with opposition politicians who accuse the government of sidelining parliament and then with Jaroslaw Kaczynski. On Tuesday the leader of PiS, viewed widely as Poland’s de facto leader and a long-time Merkel sparring partner, assumed the role of bad cop to Ms Szydlo’s good cop.

US president Donald Trump was “true, sadly, to a large extent” when he described the EU as a “vehicle” for Germany, he said.

“Mrs Merkel is the absolute number one in the EU and that’s not a healthy situation,” said Mr Kaczynski to the Frankfurter Allgemeine newspaper. “European law-making must be reduced to its core: the common market and, to some extent, environmental law.”

Dr Merkel disagreed, saying ahead of their meeting that she “cannot imagine it a realistic possibility to roll things back”.