Eyewitness footage captures French police arresting a suspect during a morning raid in the Saint-Denis region of Paris. Video: Reuters 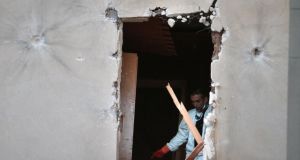 The northern Paris suburb of Saint-Denis was turned into a war zone early yesterday when 110 policemen from the elite Raid and BRI units besieged an apartment building inhabited by jihadists linked to the November 13th attacks that killed 129 people in Paris.

The assault began at 4.20am and lasted more than seven hours. It left at least two people dead, including France’s first female suicide bomber, and resulted in eight arrests. Five policemen were wounded.

“A new team of terrorists has been neutralised,” said Paris prosecutor Francois Molins. “The armoured door of the apartment at first withstood the explosives, which enabled the terrorists to prepare their riposte,” he said, describing the intensity of the raid. “There was heavy, almost uninterrupted shooting for close to an hour. The police fired more than 5,000 munitions.”

The prosecutor did not say if Abaaoud or Abdeslam might be among the dead. “I am not able to give a precise tally of the number of persons who died [in Saint-Denis],” he said.

Mr Molins said the raid was the result of a tip received two days earlier, indicating the apartment at 8 rue Corbillon in Saint-Denis was “a possible place of retrenchment for Abaaoud.”

Reuters reported that two police sources and a source close to the investigation said that the Saint-Denis cell was planning a fresh attack, targeting the capital’s La Defense business district.

Mr Molins said investigators are also studying the role of Fabien and Jean-Michel Clain, the French brothers in Syria who recorded the message claiming responsibility for Islamic State.

Mr Molins said he believed a woman had detonated an explosives belt, but that would have to be verified by forensic work. French media reported that the 26-year-old female suicide bomber was born in Clichy-la-Garenne and was a cousin of Abaaoud.

“Keep your hands in the air,” the police shouted back. “Suddenly, there was an enormous explosion [from the window inside the apartment],” the witness said.

Mr Molins said the rented Polo, Seat and Renault Clio used in the November 13th attacks “arrived almost in a convoy at 10-minute intervals from Belgium on November 12th.”

The GPS in the Seat, and video surveillance cameras, proved it was the vehicle used in the shootings that killed more than 40 people on restaurant and cafe terraces.

Investigators are using telephone records to determine the whereabouts and contacts of the jihadists in the hours and days preceding the attacks.

One of the assailants threw a mobile telephone into a bin outside the Bataclan concert hall. It contained a text message sent at 9.42pm on Friday. “We’ve started,” it said. Investigators are trying to determine who the text was sent to.