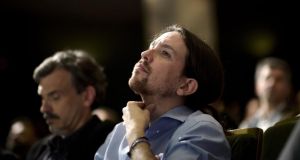 Podemos leader Pablo Iglesias: “In these elections there aren’t many options, there are basically two: to leave things as they are or to change. We believe things can change.” Photograph: Dani Pozo/AFP/Getty Images

With Spain holding local elections in less than three weeks, political party Podemos has unveiled a policy manifesto which sees it reach out to centrist voters and move away from its radical roots.

Polls show that Podemos, which was only formed 16 months ago, is in a virtual tie with the governing Popular Party (PP), the Socialists and another new party, Ciudadanos, ahead of May 24th regional elections.

“In these elections there aren’t many options, there are basically two: to leave things as they are or to change,” said the 36-year-old leader of Podemos, Pablo Iglesias, at the manifesto’s launch on Tuesday in Madrid. “We believe things can change.”

However, the package of 215 measures he unveiled was noticeably less strident and controversial than the fiercely leftist platform which won the party five European Parliament seats last year.

Podemos has frequently identified as a policy priority the evictions of struggling families from their homes. But now the party is proposing that debtors and creditors negotiate mortgage payments, instead of advocating the suspension of all such foreclosures as it did previously.

The party has also replaced a previous plan for a blanket state handout with a pledge to raise salaries for low earners.

It has maintained proposals to increase transparency in public office, demanding published expenses from elected officials and tightening regulations to prevent conflicts of interest for politicians. It also wants to raise taxes for those who earn more than €50,000 per annum.

However, there are signs not all those who have supported Podemos in the past are pleased at the way the party is heading. Tuesday’s presentation follows previous policy adjustments which have seen the party ditch plans to reduce the retirement age from 65 to 60 and declare a moratorium on the public debt.

Having led many national polls earlier this year, encouraging comparisons with Greece’s Syriza, Podemos has dipped several points in recent months, while the right-of-centre Ciudadanos has surged.

Despite the radical background of its leaders and the overtly leftist nature of many early policies, Podemos initially insisted it was neither on the left nor right of the political spectrum.

But, in late 2014, Mr Iglesias surprised many by describing the party as social democratic, a strategy the new manifesto appears to support.

Last week, one of the founders of Podemos and its third most senior figure, Juan Carlos Monedero, resigned, apparently in disagreement with the recent move to the centre. A former adviser to the late Venezuelan president Hugo Chávez, Mr Monedero was widely seen as a radical influence.

“We have to maintain the tension between both extremes.”