Paris attacks: What we know about the suspects so far

How many died, who was responsible, what is happening in Paris, what happens next? 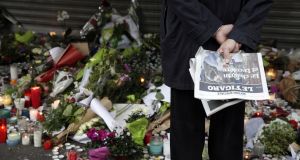 Flowers and candles are placed outside the Le Belle Equipe restaurant along the Rue de Charonne in central east Paris, on November 15th, 2015, two days after deadly attacks across the city. Photograph: Kenzo Tribouillard/AFP/Getty Images

How many people died?

Most of the 129 confirmed fatalities resulted from the mass shooting at the Bataclan theatre at about 9.20pm on Friday. Other deaths came after suicide bombings and shootings around the same time in five other locations, including restaurants and a soccer stadium.

More than 350 people were wounded, with at least 99 of them in critical condition, Paris officials said. It is the worst terrorist attack in Europe in 11 years, since the co-ordinated bombings of commuter trains in Madrid killed 191 and wounded 1,800 in 2004.

The assaults were carried out by three co-ordinated teams.

- Seven attackers were killed in the Paris attacks. An eighth man is still feared to be at large.

- Only one of the attackers, Ismaël Omar Mostefaï, has so far been named by French police. Mostefaï’s brother, father and sister-in-law are among seven people being questioned by police on Sunday. The 29-year-old, who is of Algerian origin, was from Courcouronnes, a town in Essonnes south of Paris.

He was identified by his severed finger, which was found among the wreckage of the Bataclan concert hall, where he and two other militants blew themselves up.

- Two of the attackers were French nationals who lived in Brussels, according to the Belgian prosecutor. Police made at least seven arrests in Brussels on Sunday as part of the investigation centred on the Belgian capital.

- At least seven people have been detained following raids in Brussels. Three men were arrested on Saturday, with at least four further arrests taking place on Sunday. Police are still investigating whether those detained can be linked to the Paris attacks.

- It is believed three of the suspects are brothers, with one being the man still at large. Another as arrested in Belgium.

- A passport was found near the site of one of the bombings belonging to a Syrian man named Ahmed Almohamed (25), who is considered a suspect in the attack. The Serbian newspaper Blic said he had crossed into the country on October 7th, having arrived four days earlier in Leros, Greece. The paper also reported that French security officials had asked their Serbian counterparts for help as the man had been registered in the southern Serbian town of Presevo. A Greek newspaper, Protothema, said he was travelling with a second man, Mohammed Almuhamed, and published pictures purporting to show their travel documents. As ever, such details are hard to verify. It cannot be ruled out that the men were travelling under false documents – the Guardian has previously reported on the burgeoning trade in fake and stolen passports.

- Police are still hunting one man involved in Friday night’s attacks, French media report. Citing police sources, BFM TV said a French national who rented a Volkswagen Polo seen outside the Bataclan concert hall where 89 people died was “not among the seven dead attackers or the men arrested so far in Belgium”.

Where is the investigation leading?

The investigatin has spread from France to Belgium, Greece and Germany

The police have detained seven people in Belgium. Four have been detained in France. In Germany, the police were exploring whether a man they arrested last week with weapons in his car and his GPS navigator set for Paris was linked to the attacks.

What is happening in Paris?

The capital is under a heavy police presence, and checks at France’s borders have been reinstated. Air travel continues but with significant security-related delays.

Public protests – a constitutional right in France – are prohibited in Paris and some of the surrounding departments until Thursday.

Many events are cancelled. Schools with classes or activities, cultural places and other venues (the Eiffel Tower, movie theaters, Disneyland Paris, department stores) are closed.

The French president declared three days of mourning, and officials are advising Parisians to stay home.

A memorial Mass is set for the Cathedral of Notre-Dame on Sunday evening.

On Thursday, more than 40 people were killed in Beirut, Lebanon, in a bombing that targeted Iran’s Hezbollah allies. Earlier this month, more than 200 people died in the explosion of a Russian charter jet over Egypt.

The Islamic State claimed responsibility for both, and, now with Paris, the events suggest that the regional war has transformed into a global one.

In January, Paris suffered another massacre, when 17 people were killed at the French satirical weekly Charlie Hebdo and in related attacks around the French capital.

Islamic State claimed the attacks were a response to France’s campaign against its fighters and insults against Islam’s prophet. The group warned that France would remain one of its top targets.

Bomb threats in Paris have become almost routine: Friday had begun with one at the German soccer team’s hotel and one at the Gare de Lyon train station.

The French president is sending his foreign minister to Turkey on Sunday for the Group of 20 summit meeting in his stead.

Terrorism became the main topic for Saturday’s debate of the candidates for the Democratic nomination for US president.

On social media, people are using the hashtags #prayforparis, #parisattacks and #MuslimsAreNotTerrorists. Facebook turned on its “Safety Check” tool so people could let friends and family know they were safe.

The European Union called for a minute of silence to be held at 11am GMT on Monday.