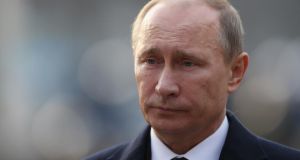 Under a law introduced by Vladimir Putin’s government last year, NGOs in Russia which receive funding from abroad are obliged to register as “foreign agents” – a term which for many Russians suggests espionage. Photograph: Sean Gallup/Getty Images

Europe’s main democracy watchdog has called on Russia to end a wave of raids on non-governmental groups and urged it to find the people who attacked a campaigning journalist who died this week.

The European Union, United States, Germany and France have complained to Russia about unannounced inspections of scores of domestic and international NGOs in recent weeks.

Dunja Mijatovic, press freedom chief for the 57-nation Organisation for Security and Co-operation in Europe (OSCE), said of Russia’s media NGOs that “any actions to intimidate them and interfere with their activities could impact on media freedom and create a chilling effect on those who champion freedom of the media”.

Major global groups like Amnesty International and Human Rights Watch have been raided in the past month, as have prominent Russian civic organisations like Memorial and independent election monitor Golos.

Under a law introduced last year, NGOs in Russia that receive funding from abroad are obliged to register as “foreign agents” – a term which for many Russians suggests espionage.