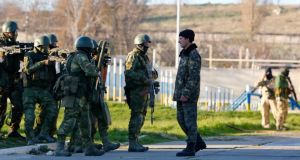 A Ukrainian serviceman (right, front) talks to armed men, believed to be Russian servicemen, at a military airbase in the Crimean town of Belbek near Sevastopol. Photograph: Reuters 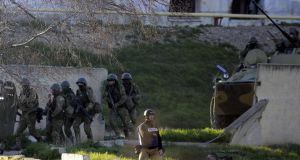 epa04136718 Crimea's self-defense units detain some people as they storm the Belbek Air Force base in Belbek, Ukraine, 22 March 2014. Belbek was the last Ukrainian military base, which has not surrendered after the annexation of Crimea by Russia. Crimean Premier Sergey Aksenov stressed that the base had been liberated from 'foreign troops'. In recent days, Russia has sought to clear out the last few pockets of resistance by browbeating dispirited Ukrainian troops into surrender. EPA/JAKUBI KAMINSKI POLAND OUT 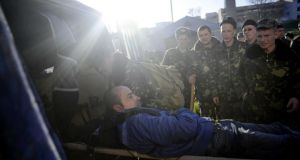 Ukrainian soldiers assist a comrade during an assault by the Crimea’s self-defense units at the Belbek Air Force base in Belbek, yesterday. Photograph: EPA

Nato’s top military commander said today Russia has a large force on Ukraine’s border and he is worried it could pose a threat to Moldova’s separatist Transdniestria region.

“The (Russian) force that is at the Ukrainian border now to the east is very, very sizeable and very, very ready,” Nato’s Supreme Allied Commander Europe, US Air Force General Philip Breedlove, told an event held by the German Marshall Fund think-tank.

Russia’s seizure of Crimea, which has a majority Russian population, after the ousting of Ukraine’s pro-Russian president by mass protests has triggered the worst East-West crisis since the Cold War.

The US and the European Union have targeted some of Mr Putin’s closest political and business allies with personal sanctions and have threatened broader economic sanctions if Mr Putin’s forces encroach on other eastern or southern parts of Ukraine with big Russian-speaking populations, Gen Breedlove said.

Nato was very concerned about the threat to Transdniestria, which declared independence from Moldova in 1990 but has not been recognised by any United Nations member state.

About 30 per cent of its half million population is ethnic Russian, which is the mother tongue of an overall majority.

Russia launched a new military exercise, involving 8,500 artillery men, near Ukraine’s border 10 days ago. “There is absolutely sufficient (Russian) force postured on the eastern border of Ukraine to run to Transdniestria if the decision was made to do that, and that is very worrisome,” Gen Breedlove said.

The president of ex-Soviet Moldova warned Russia last Tuesday against considering any move to annex Transdniestria, which lies on Ukraine’s western border, in the same way that it has taken control of Crimea.

The speaker of Transdniestria’s parliament had urged Russia earlier to incorporate the region.

Russia’s deputy defence Minister Anatoly Antonov was quoted by the state’s Itar-Tass news agency today as saying that Russia was complying with international agreements limiting the number of troops near its border with Ukraine.

Moscow’s ambassador to the European Union, Vladimir Chizhov, also told Britain’s BBC television today that Russia did not have any “expansionist views”.

Asked to give a commitment that Russian troops would not move into other Ukrainian territory outside the Crimea, Mr Chizhov said: “There is no intention of the Russian Federation to do anything like that.”

US Senator John McCain, a Republican foreign policy specialist, told the same BBC programme that Mr Putin’s actions in Ukraine were akin to those of Adolf Hitler in 1930s Germany.

He also said he considered Moldova and the Baltic nations, all former Soviet states with sizeable Russian populations, to be under threat.

US president Barack Obama’s national security adviser said on Friday that the world was reassessing its relationship with Russia and Washington was sceptical of Russian assurances that troop movements on the Ukraine border were no more than military exercises.

Belarussian president Alexander Lukashenko, a close ally of Russia, accepted on today that Crimea was now “de facto” a part of Russia, but he criticised the annexation as a “bad precedent”.

Hopes that the limited sanctions measures in place might dissuade further incursions were dealt a blow on Sunday when Russia’s SMP bank, whose main shareholders were targeted by US sanctions, said Visa and MasterCard had resumed payment services for its clients.

The bank said it was glad the two biggest international payments systems had listened to its arguments to reverse Friday’s suspension of services as it was wrong to target the bank, which was not itself the target of any sanctions.

Mr Putin and Russian media had mocked the sanctions, which did not stop the Russian military completing its takeover of Ukraine’s military bases in Crimea. Russia’s defence ministry said today that its flag was now flying over 189 Ukrainian military installations on the peninsula.

A referendum held a week ago after Russian troops had seized control of Crimea overwhelmingly backed union with Russia but was denounced by Washington and the European Union as a sham.

They also promised financial aid for the government - which Moscow says came to power by a coup to overthrow Russian ally Viktor Yanukovich - as soon as Kiev reaches a deal with the International Monetary Fund.

The IMF is to report next Tuesday on advanced talks with Ukraine on a loan programme that would be linked to far-reaching reforms of the shattered economy. Three months of protests were set off by Mr Yanukovich’s refusal to sign an association agreement with the EU, the political part of which was signed on Friday.