Munich shooting: What we know so far

Q&A: German teenager killed nine people and himself in attack on Friday night 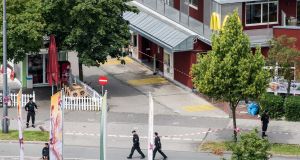 Police secure the area around the McDonald’s restaurant and OEZ shopping centre the day after a shooting spree left in which nine people were killed in Munich. Photograph: Joerg Koch/Getty Images

Who was behind the Munich shooting?

An 18-year-old Munich native from a family of reportedly Iranian extraction. Named locally as Ali Sonboly, the school student shot nine people dead and injured 27 at the city’s Olympia Shopping Centre (OEZ) at around 6pm on Friday before fleeing to the park deck. There he was confronted by police, who shot once but missed him. After fleeing to a side street, he shot himself. Police found the body at 8.30pm local time. In his backpack, 300 further rounds of ammunition.

What was his motivation?

Police have found no Islamic State or other Islamist motivation. Rather a troubled teenager with a history of depression and a fascination with shooting sprees. Bavaria’s interior minister Joachim Hermann said there were clues the gunman had “a not inconsiderable psychic disturbance”.

After raiding his home, police found in his bedroom a book by US psychologist Peter Langman about school massacres. Police also say it is significant that the shootings took place five years to the day after Anders Breivik killed 77 people in Norway.

Who are the victims?

Most of his victims were young people: two 15-year-olds, three 14-year-olds, a 17-year-old and a 19-year-old as well as a 45-year-old. No victim identities have been officially released yet but reliable Munich media reports say one Greek citizen was among the dead. A family from Kosovo lost three children between 13 and 15 in the attack. No Irish were caught up in the attacks.

How did the gunman organise the shooting?

He appears to spent months researching mass shootings, particularly at schools, and police responses. He appears to have hacked a Facebook account and lured people – possibly schoolmates – to a fast food restaurant with the promise of treating them to snacks. Police are examining his computer for further information about this lure theory, with suspicions those killed in the attack may have been related to school bullying.

What weapon did he use and where did he get it?

He used a 9mm Glock pistol with the serial number filed off, suggesting it was bought on the black market. Police are using a special technique to make the serial number visible again and track its origin. They say the youth had no weapons background or gun permit and do not know yet how he acquired the weapon. In previous school shootings in Germany, the gunman was a member of a shooting club or had a hunting licence, apparently not the case in Munich.

Why were things so confused on Friday night?

In the fast-moving crisis, many people in the centre confused non-uniformed armed police officers for additional gunmen. That lead police to believe they were looking for three shooters, not one, who had disappeared into the underground train station. They feared a repeat of last year’s Paris attacks, with an initial strike at an external point in the city to distract police, followed up by attacks in the city centre.

What role did social media play in the crisis?

A key one – both positively and negatively. Via Twitter and Facebook, Munich police were able to warn people to stay away from the shopping centre and to stay indoors. They also asked people to upload their photographs and videos of the night to assist them. But police were scathing on Saturday morning of how social media fanned a mass panic in Munich. Manpower and resources were diverted by thousands of posts – and more than 4,000 phone tip-offs in six hours – of alleged shootings across the city. Eventually, police chief Hubertus Andrä decided to close down the entire public transport network to put a lid on the situation. With thousands stranded in the city, social media came to the rescue to solve the problem it had helped create, with Munich locals opening their homes to offer strangers a bed for the night.

Those who spread rumours online on Friday can expect to hear from Munich police. Via Twitter they condemned on Saturday the “wretched game played with fear”.

“People who come up with such rumours should be prepared,” they said.

How have German politicians reacted?

Chancellor Angela Merkel waited almost 24 hours to condemn in public the “night of horror” in Munich.

“A night like this is hard for us all to bear,” she said. “All of us . . . are mourning with heavy hearts with those who will never be able to return to their families.”

Bavarian state premier Horst Seehofer visited the scene of the shooting, where he described the attacks as an “act of madness”.

“These are difficult hours,” he said, praising the speed and professional police reaction. “Without security there is no freedom, thus we need a strong state, capable of acting. But yesterday’s attack showed that we have a strong state.”

“The investigation is not yet completed, now is not the time for consequences,” he said.

Flags are flying at half-mast on official buildings in Germany and politicians are not attending any public functions. The official reception to open the Wagner festival in Bayreuth on Monday has been cancelled.

How is the situation now in Munich?

Largely back to normal in the inner city: public transport was restored in the early morning, shoppers have returned to the pedestrian zones. At the OEZ shopping centre in the northern Moosach district, locals have laid flowers at a barrier before the complex.