Munich is in lockdown after a gun attack near a shopping centre on Friday evening in the Bavarian capital which left several people dead and wounded. Video: REUTERS 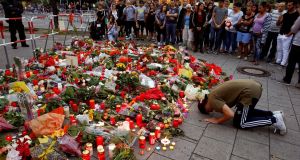 A man prays beside flowers laid in front of the Olympia shopping centre in Munich on Saturday. Photograph: Reuters 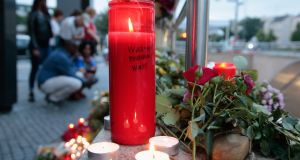 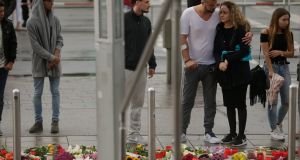 The gunman who killed nine people in Munich had planned the attack for one year, the Bavarian state crime office said.

Robert Heimberger, president of the Bavarian state crime office, said the 18-year-old visited the site of a 2009 school shooting in southwest Germany that killed 15 people a year ago.

He also said material found at David Ali Sonboly’s home showed the gunman purchased his weapon – a reactivated Glock 17 pistol – on the so-called dark net, an area of the internet accessible only via special software.

Mr Heimberger said the parents of the gunman remained in shock and were not able to be interviewed. An official of the state prosecutor’s office said the shooting victims did not include any classmates of the gunman.

Senior German officials on Sunday called for further controls on the sale of guns after Friday’s shooting.

“We must continue to do all we can to limit and strictly control access to deadly weapons,” German vice-chancellor Sigmar Gabriel, leader of the centre-left Social Democrats, told Funke Mediengruppe, which owns a series of German newspapers.

Mr Gabriel said German authorities were investigating how Sonboly had gained access to a weapon despite signs that he had significant psychological issues.

Candlelit vigils were held in Munich as the identities of those killed began to emerge.

Earlier a father visited the scene at the Olympia shopping centre to mourn his son’s death, while others paid tribute to friends and loved ones lost in the massacre, most of whom were teenagers.

A further 35 people were injured in Friday’s attack – 10 of whom are in a critical condition, including a 13-year-old boy.

German chancellor Angela Merkel said the tragedy had plunged Germany into “deep and profound mourning” that left a “night of horror” lying behind the people of Munich.

German-Iranian Sonboly, is thought to have attempted to lure victims to a McDonald’s opposite the shopping centre with a fake Facebook profile promising free food.

It is unclear if those who died or were injured had been enticed by message that is being investigated by police.

Among the dead were two 14-year-old Kosovan girls, Armela Segashi and Sabina Sulaj, and their Turkish friends Can Leyla (14) and Selcuk Kilic (15) according to reports.

A 17-year-old named in reports as Hussein Daitzik, of Greek origin, is said to have been shot dead as he shielded his sister.

Another youngster, named locally as Guilliano Kollman (18) reportedly died after being shot outside the McDonald’s.

On Saturday afternoon Naim Zabergja, a policeman of Kosovan heritage, visited the scene to lay flowers where his son, Dijamant (21) was killed.

According to reports the oldest victim of the killer was Sevda Dag, a 45-year-old Turkish woman.

At a press conference Dr Merkel said the events are “difficult to bear for everyone” and pledged to “find out the background” of what happened.

She added: “What lies behind the people of Munich is a night of horror – we are still shocked by the pictures and reports of the witnesses.

“Nine people who were going shopping on the Friday evening, or wanted to eat something, they are now dead – it seems according to the investigations, hit and killed by the bullets of one single perpetrator.”

The chancellor said the operation between the agencies and security forces on Friday night was “seamless” and thanked them for their “phenomenal” effort.

She said: “We are in deep and profound mourning for those who will never return to their families. The families, siblings, friends to whom everything will be void and empty today.

“I would like to tell them, in the name of many, many people in Germany, we share in your grief, we think of you and we are suffering with you.

“Our thoughts also go out to the numerous injured people – may they recover quickly and completely – they will receive all the support they need.

Officials said the killer used a 9mm pistol and had 300 rounds of ammunition in his rucksack when he went on what they called a “classic shooting rampage”.

Police said the weapon was a Glock 17 handgun which had had its serial number illegally filed off, and there were indications the gunman had been in psychiatric care and treated for depression.

They confirmed his room in the flat he was living in had been searched, and that documents of “frenzied attacks” had been discovered, but there was no evidence he had links to Islamic State.

According to reports the killer had an “obvious” link to Norwegian mass-murderer Anders Behring Breivik – who, five years to the day of the Munich attack, slaughtered 77 people.

Mr Heimberger said that it appeared the gunman had hacked a Facebook account and lured people to the shopping centre with an offer of free food.

The posting, sent from a young woman’s account, urged people to go to the centre at 4pm, saying: “I’ll give you something if you want, but not too expensive.”

Mr Heimberger said they are investigating as “it appears it was prepared by the suspect and then sent out”.

Officials said the attacker was not known to them and had no criminal record. He later killed himself.