Britain will withdraw from an agreement that allows some other European countries to fish between six and 12 miles from its coast as it "takes back control" of fishing policy, Britain's Environment Secretary Michael Gove said on Sunday (July 2). 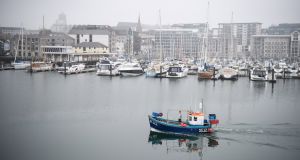 Britain’s signalled withdrawal from the London Fisheries Convention is its “first serious shot on Brexit”, according to Irish industry organisations.

The Irish South and West Fish Producers Organisation and Killybegs Fishermen’s Organisation (KFO) say its proves that Britain is seeking a “hard EU exit” on fishing.

The Government must ensure protection of the marine resource is high up on its Brexit agenda, the organisations have said.

The KFO has also called on the Government to review its plans for legislation facilitating reciprocal fishing rights on both sides of the Border.

Minister for the Marine Michael Creed described the British move announced by environment secretary Michael Gove at the weekend as “unwelcome and unhelpful”, but noted that it would take at least two years to come into effect.

The 53-year-old agreement grants rights to six neighbouring coastal states to fish within six to 12 nautical miles of each others’ coasts, based on historic activity. The access rights were incorporated into the EU Common Fisheries Policy of 1983.

Britain’s “Fishing for Leave” campaign – involving industry interests – had insisted its government must withdraw from the 1964 convention to ensure there was no “back door” to its waters for Ireland and others after its withdrawal from the EU.

The British campaign has welcomed Mr Gove’s announcement as “a first small step” in “regaining full control of the 200-mile exclusive economic zone” and “a £6.3 billion industry which could be a beacon of success for Brexit”.

Fianna Fáil fisheries spokesman Pat “the Cope” Gallagher said it was not a great surprise, but was a “shot across the bows” by Britain.

Mr Gallagher said loss of access to the European market would harm the British fish industry,which exports 62 per cent of its catch to the EU.

He said it was clear that the commitment to a “hard Brexit” now “extends to ripping up any deal with neighbouring countries, irrespective of the benefits” .

The Republic, as the state most seriously affected, must seek the EU’s permission to secure a larger quota for the Irish fleet in compensation for loss of access, Mr Gallagher said.

Mr Gallagher, who is a former marine minister, also noted that it signalled that Britain wanted to negotiate on fisheries in isolation, rather than in the wider trade context.

However, Mr Creed said the Government was committed to ensuring fisheries were dealt with in that wider trade context, and that he had the support of EU Brexit chief negotiator Michael Barnier on this approach.

Chief executive of the fish producers’ organisation Patrick Murphy* said that the British move showed up the risks involved in the State forging an alliance with other EU coastal states on post-Brexit arrangements.

“We must insist on renegotiation of the entire Common Fisheries Policy within Brexit, if Ireland is not to find itself with 400 additional EU vessels fishing in our waters,” Mr Murphy said.

The Government and the KFO disagree with the southwest fleet on this, and insist that trying to negotiate on two fronts would only strengthen Britain’s hand.

KFO chief executive Seán O’Donoghue insisted that Mr Creed’s plans to legislate for reciprocal fishing rights North and South of the Border should be dropped, in the light of the London convention withdrawal.

The planned legislation replaces an informal “voisinage” agreement between Ireland and Britain from the mid-1960s, which was concluded when Ireland had a constitutional claim to the whole island of Ireland.

It was introduced to ease tensions over access to herring, and was latterly used to manage a cross-Border mussel fishery from the 1990s. However, four mussel fishermen from the Republic who claim the arrangement was abused took legal action which led to a Supreme Court ruling in their favour.