Migrants live and die with desperation to reach EU

Relentless hardship and exploitation numbs many to the journey’s ordeals 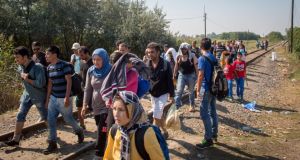 “People, this is the police – come out of the building now,” the Serbian officer blared through the loudspeaker of his squad car, the red lights on its roof turning slowly in the blazing sun.

The house seemed deserted save for a row of brightly coloured, freshly-washed clothes drying on its rusty gate.

After a few seconds a man emerged from the house, looking curious but not scared or very surprised; life back home and the journey here had inured him to most shocks.

“We are from Syria. We will go, just let us keep going,” he said in broken English, as several similarly stoical faces appeared at a crack in the back door.

The Syrian explained, haltingly, that they had been brought here by a man – “a VIP, a big man”, he called him – while mimicking the beefy physique of someone the police immediately suspected to be a people smuggler.

Further – just a little further – Hungary and the European Union lie beyond parched fields and scrubland, barely a kilometre from this house in the Serbian village of Horgos.

All day Monday, just as they have for many months now, people from the Middle East, South Asia and Africa walked through the fields and down the railway line to cross into Hungary, easily finding gaps in the new razor-wire fence running along the frontier.

“What will the police do with us?” he asked.

“We have come all the way from Syria. Do you know what it’s like there? All we want is to be allowed into Europe. Will they let us go?”

In all likelihood, they would. Serbia – along with Turkey, Greece, Macedonia and Hungary, the other states on the “Balkan route” to the EU – wants the migrants to move on as quickly and cheaply as possible.

All the way, people profit from their desperation, exploiting their fear, ignorance of local geography and laws, and illegal status. Many are left penniless after being repeatedly ripped off; others are left to die in locked trucks on EU motorways.

They had reached the EU, but only after giving €4,200 to a man in Serbia to show them where to cross the border without being caught. They did not want to apply for asylum in Hungary, but in Belgium, where Mohammed’s parents lived.

Now they were a little closer to them, but also a little nearer destitution.

“Police with dogs caught us straight away,” said Mohammed. “Now they will fingerprint us here and we will never get to Belgium.”