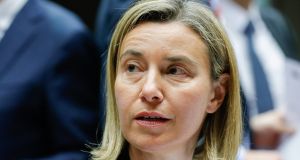 The EU’s high representative for foreign policy, Federica Mogherini, has reiterated the EU’s opposition to the death penalty “in all circumstances” and expressed her concern at the risk of sectarian violence escalating in the Muslim world. File photograph: Julien Warnand/EPA

The European Union has urged regional powers in the Middle East to “act responsibly” amid mounting concerns over the escalation of tensions in the region following the execution of Shia cleric Nimr al-Nimr by Saudi Arabia on Saturday.

Speaking in Brussels on Monday, a European Commission spokeswoman said “no effort should be spared by all parties to keep the situation under control and avoid tensions”.

“Any actions that could feed violence in the region and beyond must be avoided and we expect all regional powers to act responsibly in an already very volatile situation,” the spokeswoman said.

“We are continuing to follow the situation closely and contacts are ongoing at all levels with our partners.”

The comments follow a spate of diplomatic activity by the European Union in the wake of Saturday’s execution, which sparked attacks on the Saudi consulate in Tehran and protests across the Sunni world.

Ms Mogherini said she had reiterated the European Union’s opposition to the death penalty “in all circumstances” and expressed her concern at the risk of sectarian violence escalating in the Muslim world.

She also deplored the attack on the Saudi embassy in Tehran and warned Iran’s foreign minister that escalating tensions could jeopardise Syrian peace talks.

The EU is one of the main participants in the Syrian peace talks in Vienna, through which a political solution to the five-year conflict is being sought.

The European Commission confirmed on Monday that contacts were continuing between the EU and the various regional powers in the wake of the crisis.

The US state department on Monday renewed its call for leaders in the Middle East to try to calm tensions.

“The United States is concerned about rising tensions in the Middle East . . . We call on all sides to avoid any actions that would further heighten tensions in the region,” said spokesman John Kirby.

The US had raised concerns with Saudi Arabia ahead of the execution of al-Nimr, the White House said on Monday.

White House spokesman Josh Earnest said the United States “would condemn any country that’s carrying out mass executions” and warned the dispute between Tehran and Riyadh would make it more difficult to push warring sides in the Syrian conflict toward a solution.

He said: “There have been direct concerns raised by US officials to Saudi officials about the potential damaging consequences of following through on the execution . . .unfortunately, the concerns that we expressed to the Saudis have precipitated the kinds of consequences that we were concerned about.”