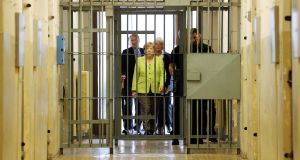 For former East Germans such as Angela Merkel, the secret police prison in Berlin’s Hohenschönhausen district was the dark heart of the vanished socialist state.

On Friday the chancellor visited the notorious prison, now a museum, and praised it for keeping alive the memory of East German oppression. “We can only shape a good future when we take on board the past,” she said.

As leader of the Christian Democratic Union (CDU) for 17 years, however, Merkel has shown little interest in examining the burdened history of her own party’s East German wing.

For 45 years the Christian Democratic Party of Germany (CDUD), a self-described party of “peace, democracy and socialism”, was an integral part of the East German state. Some 56 years ago this weekend, it welcomed the construction of the Berlin Wall as “the final and complete victory of peaceful forces in all of Germany”.

For journalist Peter Joachim Lapp, author of a book on the CDUD, its legacy is “politically and morally questionable” – and largely forgotten.

The eastern CDUD was the largest of East Germany’s so-called “block parties” that maintained the fiction that the socialist dictatorship was a democracy with parliamentary plurality. In reality all power rested with the Socialist Unity Party (SED).

The de-facto ruling party was founded in April 1946, three years before East Germany, in a forced merger between Social Democrats in the Soviet sector and the communist party.

The CDUD was founded 10 months earlier, in June 1945, to represent middle-class Christians. Described as a “breakwater of dogmatic Marxism” by an early leader, Jakob Kaiser, the early CDUD rejected SED ideas of revolutionary class struggle and “dictatorship as a means to socialist ends”.

But the SED had purged Kaiser and other “reactionary” leaders by 1952. New CDUD leaders recognised publicly “the leading role of the working class and their party” – the SED. And, in a remarkable leap of logic, they embraced the atheist socialist state as “the best opportunity for the realisation of Christ’s demands and for exercising practical Christianity”.

As with other block parties, CDUD officials were given some political positions – but no power – in exchange for their complete loyalty. The loyalty held to the end of Germany’s repressive socialist dictatorship. Even as Mikhail Gorbachev rolled out his perestroika reforms in 1987, CDUD leaders promised their “dear friend Erich Honecker”, the East German leader, could “rest assured of continued common ground”.

Writer Jürgen Schmidt-Pohl joined the CDUD in 1971 but was thrown out after six months in 1971 for “pro-western agitation”. He argues the party’s responsibility – and blame – began the moment the party was co-opted as a “block party”. “The CDUD was an integral part of the system, with leaders who co-operated and governed,” he writes in a 2003 study of the party.

He regards the transition period and unification of Germany’s two Christian Democratic parties in 1990 as a whitewash. The eastern CDU’s properties and about €15 million in assets were transferred to Helmut Kohl’s party and the past was left in the past, the regrettable responsibility of a few bad apples at the top of the eastern party.

At the unification conference in October 1990, the last CDUD leader, Lothar de Maizière, attacked his party predecessors as “corrupt” and socialism as an “unusable empty shell”. Months earlier, he described socialism as the “most beautiful vision of human thought”.

After the quick burial of its eastern past, the CDU enjoyed many happy years baiting the Left Party, successor to the SED. But the tables were turned three years ago in the central state of Thuringia, when the Left Party won the 2014 state election there.

When the Social Democrats and Greens agreed to join a coalition as junior partners, the CDU attacked all concerned. But their attacks backfired when confronted with their party’s four-decade collaboration with the East German regime and the Stasi. Chastened, the local CDU called in Weimar historian Jörg Ganzmüller to head a research project into the party’s past.

Now halfway through the project, he says a complex picture is emerging. The eastern CDU was neither ideologically as extreme as the SED, but nor did it have the resistance or victim role some in the party like to claim. A key research question, he says, is how to weight individual and party responsibility in stabilising a dictatorship that also oppressed them.

“We are not expecting a conviction or acquittal,” he said. “Not black or white, but grey tones.”

For Ganzmüller the CDU research project in Thuringia is a welcome, if overdue, start. He agrees with Merkel: that shaping a good future means taking on board the past: “The CDU has to accept that the eastern party’s history became part of its own history.”