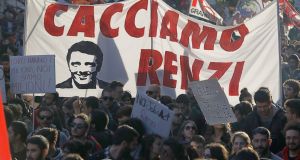 Marchers hold up a banner reading “Let’s oust Renzi” during a demonstration ahead of a referendum next Sunday on constitutional reform. Photograph: Andrew Medichini/AP 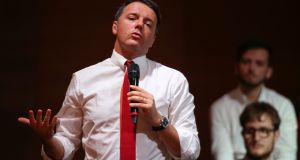 If Matteo Renzi is to score a comeback victory in the constitutional referendum that has transfixed Italian politics, Flavio Arzarello, a bearded 32-year-old Turin native, will be a big part of the reason.

Arzarello is the field director for Renzi’s “Yes” campaign, an effort on which the Italian prime minister has staked his tenure and which could shape the direction of the country’s politics for years.

His daunting mission ahead of polling day next Sunday will be to rally the base of Renzi’s centre-left Democratic party (PD), despite the disenchantment with moderate politics that is sweeping western democracies.

“I think we can do it because this will be seen as an opportunity for Italy, ” Arzarello said over sandwiches at a cafe in Rome last week. “The problem is that we are at a time in Italy where activating people to participate in politics is very difficult, and the structures of the parties, including the PD, aren’t that attractive to normal people.”

Italian political campaigns are traditionally waged through a string of primetime television appearances by the main candidates.

This year Renzi has added a US-style data-driven ground game to the mix, to reach sympathetic or undecided voters who may have simply tuned out.

To help find such people, he has hired Jim Messina, who ran Barack Obama’s re-election race in 2012 and advised David Cameron during the UK prime minister’s ill-fated Brexit campaign this year.

But getting such potential supporters to the polls may not be enough. The last surveys before a two-week blackout began on November 18th showed the “No” camp with a solid, upper-single-digit lead.

Renzi is depicting the reforms he favours, which would strip powers from the Senate and regional governments, as a desperately-needed chance to reduce gridlock and modernise Italy.

But the opposition, including the populist Five Star Movement and Northern League parties, as well as Silvio Berlusconi, the former prime minister, respond that the reforms amount to a dangerous power-grab. It is a message that appears to be gaining traction.

“To turn the tables around in the last few weeks will be a titanic, Herculean task,” says Gianpietro Mazzoleni, a professor of sociology and political communication at the University of Milan. “Messina is one of the best but I’m afraid he may add a defeat to his curriculum here.”

“Naturally, the PD has its traditional capacity to mobilise, but the old model has been consumed; it is not like it was in the 1980s or 1990s,” says Deborah Bergamini, a spokeswoman for Berlusconi, one of the leaders of the “No” camp. “We are also doing a lot, in every corner of Italy, and we don’t have the same machinery.”

One of the obstacles to data-driven electoral analysis in Italy compared to the US is that government information on who voted in which election is not available to the campaigns. However, the Democratic party has access to its own lists of primary voters, an important starting-point for Arzarello.

He is working with his deputy Mattia Tarelli, who worked for Hillary Clinton’s campaign in Iowa and at its Brooklyn headquarters, and their team of roughly 10,000 volunteers, who have been making phone calls and knocking on doors for Renzi.

Some have been trained in one of 26 sessions run by Dave Hunter, Messina’s top lieutenant on field operations, who has been living in Rome in the months leading up to the vote.

Arzarello says the “Yes” campaign is trying to recreate a similar dynamic to Obama’s 2008 campaign efforts in Florida, where young volunteers convinced elderly voters, who will be pivotal to the outcome in Italy, to back change.

Renzi’s campaign is betting that there is a silent majority in favour of the reforms but not captured by the polls. “Because of the violence and the tones used by the other side, you wouldn’t go to a bar and declare yourself a ‘Yes’ voter, you’ll be quiet,” says Arzarello.

That may be wishful thinking; even Arzarello acknowledges the likely limits to what a ground game can achieve. “I see a positive trend, but I am also superstitious,” he says. “The point is we want to wake up on the morning of December 5th knowing we did everything we could.”