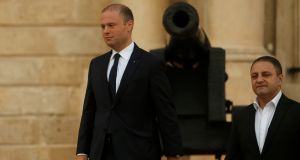 Maltese prime minister Joseph Muscat (left) and his head of communications Kurt Farrugia walk out of his office to the jeers of people protesting the assassination of journalist Daphne Caruana Galizia in a car bomb attack, in Valletta, Malta. Photograph: Darrin Zammit Lupi/Reuters

Prime minister Joseph Muscat offered on Wednesday a major reward to anyone with information about the killing of prominent journalist Daphne Caruana Galizia, saying no expense would be spared in solving the crime.

Ms Caruana Galizia, who regularly lambasted Mr Muscat in her popular blogs, was killed on Monday by a bomb which tore apart her car as she was driving away from her home on this southern Mediterranean island.

Dutch forensic experts and investigators from the US Federal Bureau of Investigation (FBI) are helping the local police inquire into the murder, which shocked Malta and drew condemnation from around Europe.

“We will make sure our investigators have all the resources they need and all the foreign expertise necessary to get to the bottom of this,” Mr Muscat told Reuters in his office, housed in an 18th century baroque palace.

Shortly afterwards, Mr Muscat told parliament his government would offer a “substantial and unprecedented reward” for information about the crime and said any informants would be given full legal protection. He gave no further details.

Mr Muscat, who easily won re-election in June after calling a snap vote in response to Ms Caruana Galizia’s charges of corruption, said he would not stand down, but acknowledged that the killing had hurt the country’s reputation.

“This has done no good for sure. But, we want to show people that this is not us. This is not what we stand for.”

Forensic teams on Wednesday combed the crime scene for evidence, with body parts and fragments of the car blown across a wide area by the powerful blast. Police have yet to give any information about their findings to date.

Ms Caruana Galizia’s son Matthew denounced Mr Muscat in a fierce outburst on Tuesday, saying he had allowed a “culture of impunity” to take root in Malta, undermining both the judiciary and the police during his five years in office.

Mr Muscat, who earlier this year sued Ms Caruana Galizia over her allegations of financial wrongdoing within his family, played down the son’s criticism.

“I think I would have said worse things if I had found my mother butchered in a car explosion, so I would not take exception at what he said,” he said.

However, he rejected criticism that he had allowed wealthy foreigners to hold great sway over Malta, which has a population of some 400,000 and is the smallest European Union nation.

His government has encouraged foreign firms to set up subsidiaries to take advantage of low tax rates, has allowed a rapid proliferation of online gaming firms and instigated a scheme to let wealthy outsiders buy Maltese passports.

“Our economy is heavily diversified,” he said. “I think our financial services sector is as transparent, solid and compliant as any other European jurisdiction.”

Opposition leader Adrian Delia, himself a recent target of Ms Caruana Galizia’s verbal assaults, has demanded the resignation of Mr Muscat, accusing him of destroying the rule of law in Malta.