Macron stakes claim to being the anti-Trump during UN address 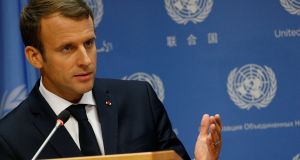 In an allusion to Donald Trump, Emmanuel Macron said: “While some would like to stop, we must continue to advance, to go farther. Because global warming does not stop.” Photograph: Brendan McDermid/Reuters

Without once naming Donald Trump, French president Emmanuel Macron staked his claim to being the anti-Trump in his first address to the United Nations General Assembly on Tuesday.

Mr Trump said he was prepared “to totally destroy North Korea”. While Mr Macron admitted that the threat from North Korea “concerns all of us existentially, collectively”, he insisted on a political resolution to the crisis.

“France will reject any escalation and will not close any door to dialogue,” Mr Macron said

Mr Trump called the July 14th, 2015, nuclear accord with Iran “an embarrassment” and one of the worst ever agreed to by the US. Mr Macron said he defends the “solid, robust and verifiable” agreement with the Islamic Republic of Iran.

Mr Trump emphasised America first. Mr Macron praised multilateralism as the most efficient force in the world, “because all our challenges are global: terrorism, immigration, global warming, regulation of the digital revolution. None of that can be solved other than on a global level.”

Since he announced last June 1st that he would pull the US out of the December 2015 Paris Accord on climate change, Mr Macron has sought to lead the fight against global warming, under the slogan “Make our planet great again”.

The French leader cited Hurricane Irma, which devastated two French islands in the Caribbean, as evidence of the catastrophes caused by global warming.

“Our planet is taking revenge for the folly of men,” Mr Macron said. “Nature is calling us to order and telling us to fulfil our duties of humanity and solidarity. Nature will not negotiate. It falls upon humankind to defend itself by protecting her.”

France had promised before the UN assembly to achieve a universal agreement on climate change in Paris. That promise was kept. “This accord will not be renegotiated,” Mr Macron said, alluding to Mr Trump. “We are bound by it. It unites us. To unravel it would destroy not only a pact between states but one between generations.”

Mr Macron was applauded twice: when he said he “respects” the US decision, and that the door will remain open to the US, and when he expressed determination to see the accord enforced.

French officials say the Trump administration is conveying mixed signals. Last Sunday, the US secretary of state, Rex Tillerson, told CBS News that the US remains “open and ready” to remain engaged on climate change.

France will convene a second climate conference in Paris on December 12th, for signatories of the agreement to make good on national contributions. France will devote €5 billion a year to fighting climate change from 2020, Mr Macron said.

In another allusion to Mr Trump, Mr Macron said, “While some would like to stop, we must continue to advance, to go farther. Because global warming does not stop. Our duty to humankind does not stop.”

Mr Macron presented his proposal for a UN contact group to address the civil war in Syria. He said negotiations in Astana, Kazakhstan, could be useful, but are not enough. Russia, Iran, Turkey, the Syrian regime and opposition have used talks in Astana to de-escalate the conflict in limited zones. France does not participate in the talks, nor has it been involved in UN-sponsored negotiations in Geneva.

The group proposed by Mr Macron would include the five permanent members of the Security Council and all protagonists in the conflict. The US has not taken an official position on the proposal, but a statement by state department official Brian Hook that the US is determined to prevent the “Lebanonisation” of Syria was interpreted as a sign of US opposition.