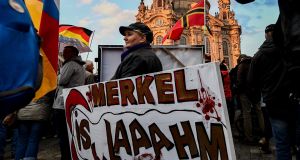 A supporter of the Pegida movement and German right-wing populist party Alternative for Germany holds a banner against Angela Merkel, in Dresden, on Monday. Photograph: Filip Singer/EPA

Germany’s far-right Alternative für Deutschland (AfD) has embraced the xenophobic Pegida movement to boost its vote ahead of Sunday’s federal election. On Monday evening in Dresden, leaders of the anti-immigrant and Islamophobic movement urged supporters to support the AfD in the coming poll.

Pegida organiser Lutz Bachmann, a political activist and convicted drug dealer, told supporters to give first and second votes to the AfD. “It’s time for a political upheaval,” he said. “Together we can manage this.”

Until now the AfD in Saxony has, technically at least, kept its distance from the Pegida movement. But on Monday evening in Dresden, local AfD officials set up their own stage adjacent to the Pegida platform to hold a rally directly after.

“I’m delighted to stand here for the AfD . . . with our Dresden patriots and together with Pegida,” said Egbert Ermer, AfD head in the constituency where party leader Frauke Petry is running for the Bundestag. “The AfD and Pegida are standing here together in Dresden, in Saxony and in Germany.”

While Ms Petry was absent, other AfD Bundestag hopefuls addressed the crowd of about 1,000 people. Party speakers said the Merkel administration had “blood on its hands” over its refugee policy which, one added, was an attempt at umvolkung – a Nazi-era term to describe population exchange or inversion.

The joint rally in Dresden attracted cheers from Pegida supporters: middle-aged men, as well as younger men in clothing brands favoured by neo-Nazis. Monday’s joint appearance follows a series of calculated provocations by the AfD, in line with its campaign plan to maximise media attention.

Last week, in a leaked email from 2013, AfD leader Alice Weidel described mass immigration to Germany as a “systematic destruction of civil society” by a “marionette” government. Berlin, she added, was in thrall to victorious Allied powers determined to “keep down” the German people.

Co-leader Alexander Gauland has attracted attention for suggesting Germany has the “right to be proud of the achievements of the German solders in two World Wars”.

The AfD insists it is not a racist or xenophobic party, merely articulating concerns of voters over the consequences of chancellor Angela Merkel’s policies on the euro and refugee crises.

Opinion polls suggest the party founded in 2013 is on course to score at least 10 per cent on Sunday.

In Dresden, Pegida supporters said the joint election rally was belated recognition of broad overlap between Pegida and the AfD, already sitting in all but three of Germany’s regional parliaments.

“Pegida is the original form of the protest, while the AfD recognised as a party that we have to do something against the Islamisation of the West,” said one demonstrator.

Since 2014 Pegida has been holding weekly demonstrations in Dresden, though numbers are down from a peak of 15,000 to between 1,000 and 2,000. Last year Pegida founder Lutz Bachmann was found guilty of inciting hatred for describing refugees on Facebook as “vermin” and “scum”.