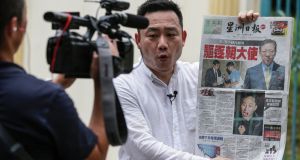 Malaysia has declared North Korea’s ambassador, Kang Chol, “persona non grata” and expelled him after he said “foreign forces” colluded in the murder of the half-brother of North Korean leader Kim Jong-un.

Mr Kang, who said Pyongyang “cannot trust” Malaysia’s handling of the investigation, has been asked to leave Malaysia within 48 hours, in the latest escalation of the diplomatic row between the two countries.

The two women, Doan Thi Huong from Vietnam and Siti Aisyah from Indonesia, were formally charged with murder last week. They both said they thought they were taking part in a TV prank.

Mr Kang had been fiercely critical of Malaysia and accused his host country of coming under the influence of “foreign powers”, a veiled reference to North Korea’s bitter rivals, South Korea.

“It should be recalled that the ambassador has alleged that the conduct of the investigation into the death of a North Korean citizen on February 13th indicates that the Malaysian government had something to hide and that it colluded with outside powers to defame his country,” foreign minister Anifah Haji Aman said.

He said the release of North Korean national Ri Jong-chol due to lack of evidence was proof that the investigation was carried out in an impartial, fair and transparent manner, and Malaysia had demanded an apology from the ambassador, but none was forthcoming.

Malaysian police are seeking several North Koreans, including the second secretary at the embassy, over the death of Kim Jong-nam.

“Malaysia will react strongly against any insults made against it or any attempt to tarnish its reputation,” the foreign minister said.

Malaysia has been one of the few countries friendly to North Korea in the region.

En route back to Pyongyang on Saturday, Ri Jong-chol, the deported North Korean, said he and his family had been threatened by Malaysian police to make a confession.

“These men kept telling me to admit to the crime, and if not, my whole family would be killed, and you too won’t be safe. If you accept everything, you can live a good life in Malaysia,” Mr Ri told reporters at Beijing airport on the way back to Pyongyang. “They were plotting to tarnish my country’s reputation.”

Kim Jong-nam was travelling using a diplomatic passport under the name Kim Chol. Pyongyang has not yet confirmed that the body is that of Kim Jong-nam, acknowledging him only as a North Korean citizen.