Lukashenko pledges to end Belarus protests ‘in the coming days’ 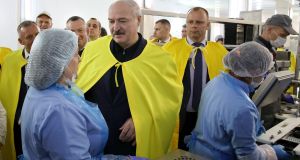 Belarusian president Alexander Lukashenko has vowed to quell the biggest-ever protests against his rule in the coming days, as opposition leader Svetlana Tikhanovskaya called for more rallies and strike action to bring down his regime.

With neither side backing down ahead of another weekend of planned demonstrations, top diplomats from the European Union and Russia spoke again on Friday about a crisis that is putting fresh strain on their already fractious relations.

“It shouldn’t worry you,” Mr Lukashenko told staff at a poultry processing plant near the Belarusian capital, Minsk. “It’s my problem, which I should solve, and we are solving it. And believe me, we will resolve it in the coming days.”

In reference to an earlier meeting with top security officials, he added: “They are on duty every day from morning to night, to maintain peace and calm. And I saw that those lads don’t plan on giving away their country to anyone.”

Hundreds of thousands of Belarusians have taken to the streets to reject Mr Lukashenko’s claim to have won an August 9th presidential election, and to denounce a subsequent police crackdown on peaceful protesters in which at least three people died, hundreds were injured and about 7,000 detained.

Many towns and cities are now witnessing daily rallies to demand his resignation, and strike and protest action has disrupted major factories and mines, state-controlled media and other erstwhile bastions of support for an autocrat who has run his country of 9.5 million since 1994.

Opposition challenger Svetlana Tikhanovskaya claims to be the rightful winner of an election that the EU says was not democratic, and she is now in neighbouring Lithuania after allegedly being threatened by the regime in Minsk.

“The future of Belarus, and therefore the future of our children, now depends on your unity and your determination. Therefore, I ask you to continue and expand the strikes,” Ms Tikhanovskaya said in a video address released on Friday.

“The people of Belarus will never again be able to accept the current leadership, or forgive and forget about the violence experienced by our citizens during peaceful demonstrations,” she said later in a press conference.

As pressure has grown on his regime, Mr Lukashenko has made increasingly lurid claims about western states being behind the protests, while turning to Russia for pledges of military support against any foreign threat to Belarus.

“The United States is planning and directing all this, and the Europeans are playing along,” he said, adding that several capitals “from America to Warsaw” were working against him.

Speaking to Russian foreign minister Sergei Lavrov on Friday, EU foreign policy chief Josep Borrell said of Belarus: “Any negative external interference must be avoided. It is for the Belarusian people to determine their country’s future.”