Lorca executed by Francoists at start of civil war

Poet was killed in 1936 on orders of troops loyal to Franco, police papers confirm 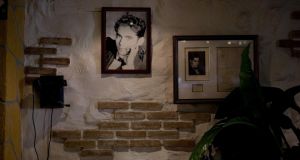 Federico Garcia Lorca was driven to the outskirts of his hometown, Grenada, and ‘shot, after having confessed’, a police document states. Photograph: Pablo Blazquez Dominguez/Getty Images

After eight decades of conjecture, rumour and denial, it has finally been confirmed that the poet Federico García Lorca was killed in 1936 on the orders of troops loyal to right-wing general Francisco Franco.

Police papers dating from 1965 document the killing of the writer at the start of the three-year Spanish civil war, citing as motives his leftist politics and homosexuality.

The document, written by the authorities under Franco’s command in Lorca’s hometown of Granada and obtained by radio network Cadena Ser, gives basic biographical information about the poet before briefly recounting his arrest.

Then, the document continues, he was driven to the outskirts of the city and “shot, after having confessed”. The content of the confession is not explained.

“This is a tremendously important report because it’s official,” Lorca’s Irish biographer, Ian Gibson, told Cadena Ser. It “highlights the fact that Lorca was arrested on the orders of the local authorities and that it wasn’t just a street murder carried out by anyone”.

The 1965 report was a response to a request for information about Lorca’s death by the late French writer Marcelle Auclair, although she never received it.

Lorca, who was 38 when he died, has become Spain’s most widely admired modern writer. The author of Poet in New York, Lorca also wrote acclaimed plays, such as Blood Wedding and The House of Bernarda Alba. A gifted artist and musician, he was friends with Salvador Dalí and Luis Buñuel.

His death at the hands of Francoist troops has been common knowledge since the civil war, which Franco won in 1939, defeating the leftist Republican government, before ruling Spain as a dictator for the next four decades.

However, the circumstances of Lorca’s execution have never been officially confirmed. This is believed to be because the Franco regime immediately understood that the murder of the internationally renowned writer was extremely bad publicity.

Shortly after reports of the poet’s death emerged, British writer HG Wells wrote to the Granada authorities, requesting news of him. In a terse reply, the governor of Granada said he did “not know [the] whereabouts of Don Federico García Lorca.”

Although he was not actively involved in politics, Lorca’s leftist sympathies were known, as was, to a lesser extent, his sexuality. Towards the end of his life he had an intense relationship with a young Republican who also died in the civil war.

The Granada police report refers to this area of Lorca’s life, stating that he “was branded with carrying out homosexual practices, an aberration which came to be common knowledge, but the truth is there is no record of any concrete case in this sense”.

The police report also claims that Lorca was a Mason.

Last year, the socialist regional government of Andalusia began funding a search for Lorca’s unmarked grave 8km from Granada. To date the project has been inconclusive, as was a similar attempt made in 2009 based on research by Gibson.

Campaigners say that up to 130,000 republicans still lie in unmarked graves across Spain.