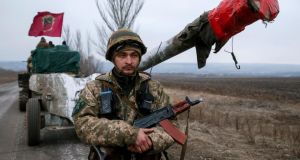 Ukraine has started withdrawing artillery from the frontline of its battle with Russian-backed militants, after a lull in fighting that Washington’s intelligence chief expects to flare up again in spring.

After two consecutive days without fatalities, Kiev’s military said yesterday it had started pulling back heavy guns that should have begun on February 15th, under a ceasefire deal that was initially ignored by both sides as they fought for the strategic town of Debaltseve.

The separatists now control that major transport hub, and insist they have already started withdrawing howitzers and other artillery pieces from the frontline of a conflict that has killed some 6,000 people and displaced about 1.5 million.

In a warning to the rebels, the ministry added: “If there are any attempts to launch an offensive, the withdrawal schedule will be changed. Ukrainian troops are fully prepared to defend the country.”

The OSCE said the Minsk deal obliged both sides to hand over a full inventory of weapons and disclose how and where they would be relocated.

“It’s not enough to be invited to follow the removal process part of the way. It has to be complete,” said OSCE spokesman Michael Bociurkiw. “It’s not a shopping list, you cannot pick and choose.”

Moscow denies providing weapons and ammunition to the rebels, and sending its own soldiers to fight alongside them. However, yesterday, Nato secretary general Jens Stoltenberg again denounced “Russia’s aggressive actions in Ukraine.”

“Russia has transferred in recent months over 1,000 pieces of equipment, tanks, artillery and air-defence systems. They have to withdraw this equipment and stop supporting the separatists,” Mr Stoltenberg said. “Any attempts to expand further the territory held by separatists would be a clear violation of the ceasefire. And it would be unacceptable to the international community.”

In recent days, Kiev has accused Russia of sending dozens of tanks over the border towards the government-held port of Mariupol, which many analysts expect to be the next target of rebels who have no outlet to the sea.

“It is not our assessment that [Russian president Vladimir Putin] is bent on capturing or conquering all of Ukraine,” US national intelligence chief James Clapper said yesterday.

“He wants a whole entity composed of the two oblasts [regions] in eastern Ukraine which would include a land bridge to Crimea and perhaps a port, specifically Mariupol . . We do not believe that an attack on Mariupol is imminent. I believe they will wait until the spring . . .”

The US and EU have vowed to impose tougher sanctions on Russia if the rebels push further – threats which Moscow’s foreign minister Sergei Lavrov said showed the West’s “unwillingness . . . to seek implementation of what was agreed”.