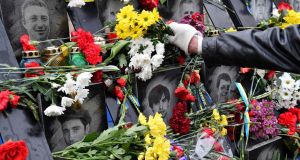 Ukraine has been lambasted for failing to achieve justice for more than 100 protesters killed during its Maidan revolution, which reached its bloody conclusion five years ago.

Security forces loyal to Ukraine’s then president Viktor Yanukovich are accused of shooting dead dozens of those victims on and around Kiev’s Maidan square on February 20th, 2014.

Yet many of the accused, like Mr Yanukovich, successfully evaded justice by fleeing to Russia, while other suspects who are still in Ukraine have escaped prosecution due to officials’ apparent unwillingness to act.

Amnesty International (AI) said that, by the end of 2018, the Ukrainian prosecutor general’s office had identified 441 suspects in the violence. The cases of 288 of them had been sent to court, but only 48 had led to convictions and just nine resulted in jail terms. No former police officers have been imprisoned.

“This is a shame and an indictment of Ukraine’s criminal justice system,” which has “resisted and obstructed justice instead of prosecuting the former and current members of the law enforcement”, said Colm Ó Cuanacháin, senior director at the office of AI’s secretary general.

“Five years is a long time to wait when it comes to justice, and for most victims who suffered at the hands of Ukrainian police, justice is still not even in sight . . . Until all those responsible, including those in command, are brought to account there can be no sense of justice,” he added.

Serhiy Horbatiuk, the head of the special investigations department at the Ukrainian prosecutor general’s office, complained this week that top officials had not kept their promises to give full support to Maidan-related cases.

“Specifically the state leadership and the leadership of the law-enforcement agencies,” he added.

Mr Horbatiuk said 36 people who are accused of committing crimes against demonstrators during protests from November 2013 to February 2014 are still working for the security services, “including 10 in leadership roles”.

The criticism reveals how officials running post-revolution Ukraine have protected and preserved long-standing networks, favouring personal connections and loyalty over the public’s demands to end corruption, crime and nepotism.

Ukraine’s security crisis after the revolution – when Russia seized Crimea and fomented war in eastern Ukraine – may also have helped some influential figures to parlay a pledge of loyalty to Kiev for informal protection from prosecution.

Prosecutor general Yuriy Lutsenko said on Wednesday that of 66 people accused of direct involvement in the murder of protesters on Maidan, 46 had fled to Russia and the rest were in custody.

He pledged to bring those cases to court as soon as Ukraine’s parliament voted on legislation related to trials in absentia.