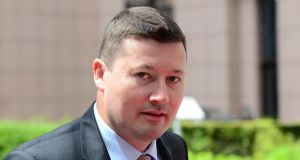 Martin Selmayr: the European Commission’s new secretary general claimed recently to have 5m of books on Ireland on his shelves. Photograph: John Thys/AFP/Getty

In a major reshuffle of the top ranks of the EU civil service, the European Commission has appointed Jean-Claude Juncker’s right-hand man as the organisation’s secretary general.

Martin Selmayr, currently chef de cabinet, or chief of staff, for Mr Juncker, the commission’s president, moves from a highly political job to that of chief civil servant, a role previously performed by the Irish officials Catherine Day and David O’Sullivan.

Juncker cited Mr O’Sullivan’s transfer to the secretary generalship from his job as chief of staff for Romano Prodi, when the Italian politician was president of the commission, as a precedent for the move.

Mr Selmayr (47), admired and feared by those who work with him for his mastery of detail, ruthlessness with those who oppose him, and determination to involve himself in even the most minute detail of policy, is a brilliant German lawyer and member of Angela Merkel’s Christian Democratic Union with, he says, a great fondness for Ireland. He claimed recently to have 5m of books on Ireland on his shelves.

He is reported to have intervened recently to add controversial text on sanctions against the UK for noncompliance with the single market during transition to the draft withdrawal treaty drawn up by the commission’s Brexit task force. The text has since been diluted.

Mr Selmayr will take over from the Dutchman Alexander Italianer and be replaced by his current deputy, the Spanish lawyer Clara Martinez Alberola. She becomes the first woman to head the commission president’s cabinet. The diplomatic adviser Richard Szostak, a Polish-British national, becomes her new deputy.

Günther Oettinger, the commissioner for budget and human resources, ridiculed the suggestion that Mr Selmayr’s appointment reinforced German control: “He is certainly not an undercover agent of Germany. ” Many in Berlin, he said, knew that only too well.

Mr Juncker said that commission staff were seen not as German or other nationalities but as “from” Germany. They were Europeans.

The commission also filled the jobs of five of its powerful departmental heads, or directors general, promoting several women and giving Cyprus and Bulgaria their first top-rank roles. The appointments will significantly boost the number of women directors-general and deputy directors-general, from just 11 per cent in November 2014 to 36 per cent now. There were no Irish promotions.