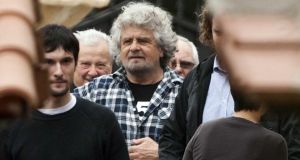 Ex-comedian Beppe Grillo represents at one and the same time the best and the worst of Italian democracy. At first glance, his 5-Star Movement (M5S), which achieved a spectacular breakthrough in the recent general election, represents a long overdue protest. It was born out of the chronic inequality and injustice of an Italian democracy that, with the exception of brief economic revivals in the 1960s and 1980s, has been on malfunction mode since 1946.

What could be better for Italy’s tired “gerontocracy” than 109 new lower house deputies with an average age of 33? What could be more “democratic” than an army of grassroots online activists who have been campaigning on issues such as rubbish incinerators, high- speed trains, broadband wifi and state water supply undergoing an overnight metamorphosis that has propelled them to the state legislature?

That is the good news. The bad news is that this revolution has come at a delicate moment, not just for the stagnant Italian economy but for the troubled euro zone. For once, the opera buffa of modern Italian political life runs the risk of not being remotely funny.


‘Tsunami’ vote
Six weeks have now passed since Italy was hit by a 26 per cent M5S “tsunami” vote in February’s election, which left it with a hung parliament. Since then, however, the “Grillini” have refused to play the coalition politics that would normally resolve such a stalemate. Rather, different Grillo parliamentarians have appeared somewhat unprepared for public office.

Deputy Gessica Rostellato (30) admitted to a satirical TV programme that she did not know what the initials BCE (European Central Bank) meant nor who Mario Draghi was. She also refused to shake hands in parliament with Democratic Party (PD) veteran deputy Rosy Bindi.

Deputy Paolo Bernini (25) told state TV RAI that “in America, they have begun to implant microchips in the human body” to control people.

These may simply be “teasing” problems, little helped by the fact that the M5S largely choose not to co-operate with mainstream media.

More worrying though is Beppe Grillo’s refusal to have anything to do with either the main centre-left party, the PD, or the Silvio Berlusconi-led centre-right PDL. He says both are equally responsible for the past 30 years of chronic Italian malfunction and corruption.

Many of the 8.6 million who voted for Grillo see this differently, pointing out that the centre-left has actually been in (stable) government for only five of the past 17 years.

Furthermore, the centre-left has never been “distracted” by the endless judicial problems, conflicts of interests and sex scandals that have undermined nine years of Berlusconi governments.

For those and other reasons, many do not understand why Grillo will not enter into some sort of coalition with the Pier Luigi Bersani-led PD, thus allowing the formation of a government. The current reality is that a parliament that cannot agree on forming a government now has 10 days to elect a new state president, as President Napolitano’s term expires in mid-May.


Election re-run
Commentators and some Grillo-supporters alike argue that the failure to put together a PD-M5S government will lead to an immediate general election re-run, perhaps in June, in which Berlusconi will be the winner. Did we enter politics to put Berlusconi back in office, many ask online.

Meanwhile, Grillo, who himself cannot stand for parliament because of a manslaughter conviction, appears to rule with an iron, online hand via a daily blog that requires strict adherence to the party line. Last weekend, he summoned his parliamentarians for a magical mystery bus tour in the Lazio countryside, the purpose of which appeared to be the need to stiffen the resolve of waverers, perhaps tempted to vote with the PD.

The best and worst of Italian democracy.