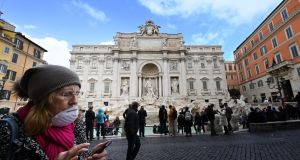 A tourist wear a protective mask as she walks in front of the Trevi Fountain downtown Rome, Italy. Photograph: Alberto Pizzoli/AFP/Getty

Italy’s health authorities said on Tuesday they may set up a new quarantine red zone to try to contain the coronavirus outbreak in Europe’s worst-hit country, after the death toll and the number of cases overall jumped.

Twenty-seven people died of the highly contagious illness in Italy in the 24 hours up to Tuesday evening, bringing the total number of dead to 79, the Civil Protection Agency said. The increase in deaths was the largest since the outbreak surfaced 12 days ago in the wealthy northern regions of Lombardy and Veneto.

It remains centred in the north, with Lombardy by far the worst affected, but it has since spread south and infections have now been confirmed in all but one of Italy’s 20 regions. The total number of cases rose to 2,502 from 2,036 on Monday.

One of the dead was aged 55, the youngest patient so far to have succumbed to the illness in Italy. Another was a 61-year-old doctor who was not known to have underlying health problems, unlike the vast majority of previous victims.

“None of us can be sure about the future evolution of the disease. This is an important week to understand what will happen,” Angelo Borrelli, head of the Civil Protection Agency, told a news conference.

In France, a fourth person has died from coronavirus infection and president Emmanuel Macron warned that the health crisis could last several months.

“During the period we are going through and that we will go through – because we have entered a phase that will last weeks even possibly months – it is paramount to show clarity, resilience, nerves and determination to slow the epidemic ... and then fight it,” Mr Macron told a crisis cell at the health ministry.

The head of the French public health service, Jerome Salomon, told a daily press briefing that France had 212 confirmed cases of the infection, up from 191 on Monday, and that 13 regions were affected.

The fourth victim was a 92-year-old man in the Morbihan department in the western region of Brittany.

“We are still in phase two. Our objective is to slow the spread of the epidemic,” Mr Salomon said.

Mr Macron has also signed a decree to requisition all stock and production of protective face masks. They will be distributed to health professionals and people infected with the coronavirus, the French president said on his website.

In Spain, a man in the Valencia region died from coronavirus, in the country’s first death from the outbreak, a local health official said on Tuesday. Tests showed the man, who died on February 13th, was killed by the virus, regional health chief Ana Barcelo said.

A high concentration of new cases in Italy has emerged around the city of Bergamo, northeast of the financial capital Milan, and the head of the national health institute a new red zone may be imposed there to try to stem the rise.

Shortly after the contagion first came to light on February 20th, the government imposed a quarantine on two areas – one encompassing ten Lombardy towns southeast of Milan, and another, smaller red zone in the region of Veneto to the east. Inhabitants are blocked inside the affected towns and police prevent any outsiders from entering.

Among the new cases announced on Tuesday were two magistrates who worked in Milan’s courtroom and a newborn baby in Bergamo. It was not clear how the child contracted the virus.

The outbreak has heavily disrupted daily life in Italy’s most affluent and productive regions, with schools closed and many public events cancelled including fashion shows and top-flight football matches.

Vinitaly, one of the world’s largest wine fairs that is held annually in the northern city of Verona, announced on Tuesday it was postponing the 2020 edition from April to June.

The Vatican acted to quell speculation that Pope Francis had contracted the illness after he cancelled a Lent retreat for the first time in his papacy. The pontiff is suffering only from a cold and is “without symptoms related to other pathologies”, it said in a statement.– Reuters