Biden makes history by picking Native American for his cabinet 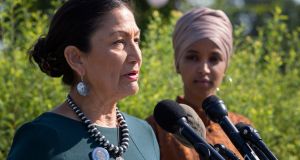 In a historic decision, US president-elect Joe Biden has chosen Deb Haaland, a congressional representative from New Mexico and a Native American, to lead the Interior Department, an agency that for much of the nation’s history played a central role in the dislocation and abuse of Indigenous communities from coast to coast.

If confirmed by the Senate, Ms Haaland would be the first Native American to lead a Cabinet-level agency. She would oversee a sprawling department responsible for some 500 million acres of public lands, including national parks, oil and gas drilling sites and endangered species habitat.

Her selection was the latest in a series of high-profile Cabinet and White House advisory decisions made in recent days, including Thursday’s choice of Michael S Regan to run the Environmental Protection Agency. Like Mr Regan, Ms Haaland would play a major role in implementing Biden’s promised climate change agenda. She would further be responsible for working to strengthen federal protections for vast swathes of territory that the Trump administration has opened up to drilling, mining, logging and construction.

Historians and tribal leaders said that her selection represents a watershed moment in the United States’ scarred history with its Native people. “It’s momentous to see an Indian promoted out of the shadows of American history to a seat at the table in the White House,” said Elizabeth Kronk Warner, dean and professor of law at the University of Utah, and a citizen of the Sault Ste. Marie tribe of Chippewa Indians. “Tribes and the federal government have a relationship that goes back to the 18th century – but despite that relationship, we have never had an American Indian at this level of government.”

Ms Haaland, a citizen of Laguna Pueblo, one of the country’s 574 federally recognised tribes, would helm the federal agency most responsible for the well-being of the nation’s 1.9 million Indigenous people. Among other things, the Interior Department runs the Bureau of Indian Education and the Bureau of Trust Funds Administration, which manages the financial assets of American Indians held in trust.

For generations, Native Americans have fought the department’s policies and demanded a greater voice in its operation. In one instance, in 1972, about 500 activists took over the department’s headquarters in Washington, DC, protesting living standards and broken treaties.

Ms Haaland was not seen as Biden’s initial choice to run the agency. In the days after the presidential election, he was believed to have been leaning toward Senator Tom Udall, a longtime friend who has spent his career pushing to conserve wilderness, according to people close to the transition team.

But a coalition of congressional Democrats, Native Americans and Hollywood celebrities kicked off a campaign urging Biden to appoint Ms Haaland. The actor and environmental advocate Mark Ruffalo posted a video on Twitter with tribal leaders speaking in support of Ms Haaland. And the Lakota People’s Law Action Centre launched a petition supported by more than 120 tribal leaders backing her.

“Like no year prior, 2020 has shown us what happens when we fail to see the importance of putting proper leaders in position to safeguard society,” the petition read. On Thursday, Mr Udall offered his full-throated support for the choice. “President-elect Biden has chosen an outstanding leader,” he said. “She will undo the damage of the Trump administration, restore the department’s work force and expertise, uphold our obligations to Native communities, and take the bold action needed to tackle the accelerating climate and nature crises.”

In a statement, Ms Haaland said, “It would be an honour to move the Biden-Harris climate agenda forward, help repair the government-to-government relationship with Tribes that the Trump Administration has ruined, and serve as the first Native American Cabinet secretary in our nation’s history.”

She has already made history once. In 2018, Ms Haaland and Sharice Davids of Kansas became the first two Native American women elected to Congress. Ms Haaland campaigned in 2018 against the Trump administration’s hard-line immigration policies and promoted Indigenous sovereignty as a “35th-generation New Mexican.” She has said that many of the issues affecting native communities, such as low-wage jobs and violence against women, afflict other groups as well.

In 2015, she became the head of the state Democratic Party and helped to flip the New Mexico state house to Democratic control. A child of military veterans, she attended 13 public schools before graduating from high school, then started a salsa company and worked as a cake decorator before putting herself through college and law school using both food stamps and student loans.

Over the past two years, Ms Haaland has served on the House Natural Resources Committee, which oversees the Interior Department. Under the Trump administration, the current and former Interior secretaries, David Bernhardt and Ryan Zinke, have used the agency to make it easier to mine and drill on public lands, while also weakening protections on endangered species. Just this week, the Interior Department finalized two rules that limit protections to animals and plants under the Endangered Species Act.

Ms Haaland has not held back in her fierce criticism of policies that have opened millions of acres to oil and gas drilling. “The sad fact is that we have a president who is intent on selling off our public lands to his friends for fracking and drilling,” she said in a speech earlier this year. She noted that under Mr Bernhardt and Mr Zinke, the Interior Department slashed the size of Bears’ Ears and Grand Staircase Escalante, national monuments in Utah that are adjacent to Navajo nation territories and a Hopi reservation, opening up the land to mining and drilling.

In her new role, Ms Haaland could be tasked with restoring protections to the monuments. That land, she said, “is now open to leases and desecration by extractive industries, which will exacerbate climate change and destroy countless sacred sites and erase our history.”

She would also be responsible for executing one of Mr Biden’s most controversial proposals: his pledge to ban all new hydraulic fracturing, or fracking, on public lands. Already, fossil fuel groups are pushing back, urging Senators to block her confirmation on Capitol Hill.

Ian Prior, a spokesman for The Empowerment Alliance, a pro-fossil-fuel organization, said that Mr Biden’s choices of Ms Haaland for the Interior Department, along with his selection this week of Regan to run the EPA, “prove that he is committed to ending the natural gas industry within 15 years.”

Mr Prior added, “We hope that the Senate looks long and hard at these nominees and holds them accountable during the confirmation process for their policies that would roll back American energy independence.” Senator John Barrasso, a senior member of the Senate Energy Committee, which will hold Ms Haaland’s confirmation hearings, said, “America’s public lands and natural resources are critical to the economy in Wyoming and across the West. While I have not had the opportunity to work with Rep Haaland on these issues, I will keep an open mind during the vetting process.”

If she is confirmed by the Senate, her departure from the House could briefly make it more difficult for Biden to advance his legislative agenda, since it would narrow the Democrats’ already razor-thin majority until a special election could be held in her Democratic-majority district.

For that reason, House Speaker Nancy Pelosi was said to have been urging Biden not to select Ms Haaland. But on Wednesday afternoon, Pelosi appeared to give her blessing. “If she is the President-elect’s choice for Interior, then he will have made an excellent choice,” she said.

Biden also said he would nominate former Michigan governor Jennifer Granholm to run the energy department and North Carolina environment official Michael Regan to run the EPA, among others, his transition team said in a statement. – New York Times and Reuters