Issues and questions of the week: Will Greece default on its debts? 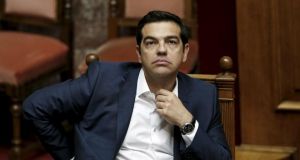 More than four months since 40-year-old Alexis Tsipras swept to power in the Greek general election, the euro zone’s most indebted country remains locked in a stand-off with international creditors.

This week the crisis took a new turn. Confirmation that Greece would not pay €300 million due to the IMF yesterday, and instead pay all four IMF payments due this month on June 30th, has dramatically raised the stakes. The move is technically legal, but reportedly took Greece’s main creditors unaware.

Greece appears to lack the cash as well as the political will to pay. Instead, it is banking on reaching a deal with creditors to unlock some of the €7.2 billion still due to it under its second bailout by the end of the month.

To date, a deal has proved elusive. The European and IMF negotiators are not happy with the reforms offered so far by Greece in exchange for funds, with a number of euro zone countries unwilling to grant concessions.

As Greece moves perilously close to default it is a dangerous game of brinkmanship.

This week saw a stepping-up of political engagement with the crisis in the highest echelons of the European Union and IMF. On Monday German chancellor Angela Merkel hosted French president François Hollande and European Commission president Jean-Claude Juncker in Berlin for talks, where they were joined by IMF managing director Christine Lagarde and ECB president Mario Draghi.

Merkel is said to have been keen to resolve the issue before this weekend’s G7 summit of global leaders in Bavaria.

The absence of Tsipras from the meeting was notable, but, plagued by rumours of divisions within the troika about how to handle the crisis, Greece’s main lenders needed to present a united front.

On Wednesday, Juncker presented Greece with the “take-it-or-leave it” offer agreed by leaders on Monday. But with Greece presenting its own counter-proposal, the breakthrough many had expected did not materialise.

Among the areas of disagreement are the institutions’ demands for further pension reforms and changes to the VAT system. Tsipras has said he is not prepared to give more ground on either, citing the enormous cuts the Greek people have already taken under five years of an austerity programme.

Coney Barrett meets Pence and senators ahead of confirmation hearing 20:20
Boris Johnson under pressure to give MPs a vote on Covid-19 restraints 19:59
Polish government hits back at letter of support for LGBTI community 19:23
Armenia, Azerbaijan accuse one another of firing on each other’s territory 19:06
France backs mediation and dialogue with Russia to end crisis in Belarus 18:45

1 Covid-19: One death and 363 further cases confirmed in State
2 ‘Insane’ gathering of hundreds of students in Galway condemned
3 Ireland will not be Brexit ‘collateral damage’, says Coveney in Washington
4 Speed and distance of Covid-19 droplets tracked by Mater researchers
5 Man unidentified in psychiatric hospital for 30 years may have DNA taken
Real news has value SUBSCRIBE