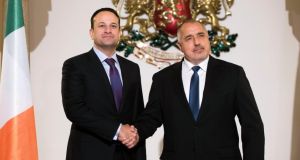 Ireland has secured the support of European Union presidency-holder Bulgaria on major Brexit issues, Taoiseach Leo Varadkar has said during a visit to the Balkan state.

“I want, in particular, to express my appreciation for the support and understanding which prime minister Borisov and his government have demonstrated on the specific Irish concerns arising from Brexit – I know that they will continue to stand with us as negotiations proceed,” Mr Varadkar said in Sofia.

“We will continue to work constructively to ensure that commitments entered into in December are delivered,” Mr Varadkar said, referring to agreement between the EU and Britain on financial arrangements and citizens’ rights, and a pledge to uphold the Belfast Agreement and ensure there will be no “hard border” in the North.

Mr Varadkar expressed hope that Bulgaria’s presidency would see the two sides “move forward to deliver certainty to citizens and businesses on the period of transition after the UK leaves and . . . begin the work of shaping the framework for the UK’s future relationship with the EU.”

“These are of crucial importance to the EU, and particularly to Ireland. Much work will therefore continue during the critical phase-two negotiations under article 50, including in the distinct strand on the Irish issues,” he added.

The burly Mr Borisov, who is serving his third term as Bulgarian premier since 2009, embraced Mr Varadkar upon his arrival at government headquarters,

“There are no unresolved problems between Bulgaria and Ireland. There is friendship and the will for co-operation,” the former bodyguard and ex-fireman said.

“We have Ireland on our side during the presidency as a good friend. What unites us is our standing for a stable, united, unified and strong Europe, despite all the difficulties we have at the moment.”

In Hungary on Thursday, Mr Varadkar said his visit to central Europe served as a useful reminder that Brexit was not the only issue of concern to the EU’s 28 members, and in Sofia his host highlighted one of the priorities of Bulgaria’s presidency – helping western Balkan states advance their EU accession hopes.

“Brexit and what is going at the other end of Europe has been interesting to us. And we in the Balkans . . . are interesting to them,” Mr Borisov said.

Bulgaria and Romania entered the EU in 2007 and Croatia joined in 2013. Serbia, Albania, Macedonia, Montenegro and Turkey are official candidates for accession, while Bosnia and Kosovo still seek that status.

“We see the EU not just as an economic project but as the peace process for Europe,” Mr Varadkar told Mr Borisov, “and we share a common approach with you on the western Balkans.”