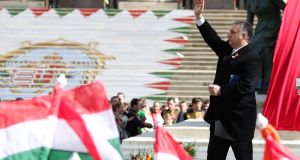 Hungarian prime minister Viktor Orban claimed on Friday that liberal values and immigration could destroy Europe, as he struck a defiant note in the face of possible expulsion from the largest party in the European Parliament.

Mr Orban has become a leader among the EU’s nationalist, anti-immigration and Eurosceptic politicians since building fences on Hungary’s southern borders in 2015 to keep out refugees and migrants.

He has sought to introduce what he calls “illiberal democracy” to Hungary, but his policies targeting asylum seekers, NGOs and Budapest’s liberal Central European University (CEU) have alarmed the centre-right European People’s Party , which includes his Fidesz group and Fine Gael.

His government’s tightening control over Hungary’s judicial system and media have also triggered EU action to counter perceived threats to democracy and the rule of law, and led to Fine Gael and 12 other EPP members asking for Fidesz to be kicked out at a party meeting scheduled for next Wednesday.

“Without Christian culture there will be no freedom in Europe ... and Europe will no longer belong to Europeans,” Mr Orban told a large crowd in Budapest as Hungary commemorated its 1848 revolution against Habsburg rule.

“In a European ‘liberal empire’, we will all lose our liberties,” he added.

If Fidesz leaves or is thrown out of the EPP, Mr Orban has said it will seek an alliance with Poland’s ruling nationalists, the Law and Justice Party, ahead of European elections in May.

Law and Justice has also discussed linking up with Italy’s far-right interior minister Matteo Salvini and his supporters, and on Friday Mr Orban was joined in Budapest by Polish prime minister Mateusz Morawiecki.

“It is us who stopped the migrant invasion of Europe at our southern borders. And it is us who want a strong Europe, strong nation states, and strong leaders at the helm of Europe, who don’t bring trouble here but take help over there,” Mr Orban said.

“We want a fresh start, so we can stop Europe’s demise, the nightmares of a ‘United States of Europe’, so that Europe once again belongs to Europeans.”

Mr Orban held talks this week with EPP leader Manfred Weber, who said that if the Hungarian leader wants to stay in the group he should scrap the poster campaign and his anti-EU rhetoric; apologise to other EPP parties; and end government pressure on CEU and ensure that it remains in Budapest.

The posters are due to be replaced and Mr Orban has sent EPP members a letter to apologise for calling his critics in the party “useful idiots”.

Mr Weber called these moves “a start, but no more”.

“If Viktor Orban doesn’t manage to create trust in the coming days among EPP parties and his critics, then things will be difficult,” the German conservative told Der Spiegel in comments published on Friday.