Hollande caught between Pantheon and a hard place 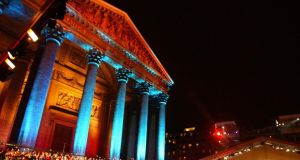 Only 73 French people have been interred in the Pantheon in Paris, more than half by Napoleon. “Pantheonisation” is one of the last privileges left to a French president, but like everything else, it has turned into a dilemma for François Hollande. Photograph: Pascal Le Segretain/Getty Images

It was a day devoted to the quest for heroes, in an age that no longer seems to produce them.

Three former prime ministers, six of France’s leading historians, prominent journalists and the speaker of the national assembly were on hand for the seminar dedicated to Pierre Brossolette, martyr of the French Resistance. Their goal: to convince President François Hollande to transfer Brossolette’s ashes to the Pantheon.

They listened intently to the testimony of Roger Lebon (88), one of Pierre Brossolette’s last surviving comrades. As a courier for the Resistance, Lebon carried messages, weapons, radio transmitters and money. He told of a bridge game in a farmhouse, while waiting for the aircraft that was meant to take Brossolette to London, of a lost cyanide capsule, of hiding in haystacks in freezing weather, of Brossolette’s arrest when the planes never arrived and how he attempted the journey by sea . . . They were reunited a few weeks later in Fresnes prison. Lebon saw Brossolette’s back, “striped like a zebra” from torture. “He was twice my age, but he treated me as an equal, with great kindness and serenity.”

Heroic death
Within days, Brossolette was dead, having jumped from a fifth floor window at Gestapo headquarters on Foch Avenue, to prevent himself talking under torture. “If he’d had the cyanide capsule, he would surely have used it to commit suicide,” Lebon said. His voice cracked: “He was a great hero. A patriot. A great Frenchman.”

The campaign to “Pantheonise” Brossolette – led by his niece, the historian Mona Ozouf, and his granddaughter, the journalist Sylvie Pierre Brossolette – has attained almost irresistible momentum. A socialist who embraced de Gaulle, Brossolette has the added advantage of having renounced political partisanship.

“2014 is the 70th anniversary of the Normandy landings and the liberation of Paris,” said Claude Bartolone, the speaker of the National Assembly, in whose sumptuous residence the seminar was held. “We should celebrate the Resistance.”

Only 73 French people have been “Pantheonised”, more than half by Napoleon. Built as a church by Louis XV, the Pantheon was converted into a monument to secular saints by the French Revolution. François Mitterrand took three red roses there on his election, and subsequently “Pantheonised” seven people. Jacques Chirac added André Malraux and Alexandre Dumas. Nicolas Sarkozy wanted to “Pantheonise” Albert Camus, but the plan backfired when Camus’s family refused.

“Pantheonisation” is one of the last privileges left to a French president, but like everything else, it has turned into a dilemma for Hollande.

In a way, he brought it upon himself, by saying on international women’s day that it was time “to receive women in the Pantheon”. Only two women presently rest there: the Nobel prize-winner Marie Curie, alongside her husband Pierre, and Sophie Berthelot, whose husband, the chemist Marcellin, did not want to be separated from her in death.

Last May, Hollande commissioned Philippe Belaval, the president of the centre for national monuments, to draw up a report. Belaval delivered 50 pages, titled “To Bring the People into the Pantheon”, on October 10th. Among his chief recommendations: “Pay homage to women of the 20th century who represent a strong republican message”.

In the meantime, rival campaigns have sprouted like mushrooms. Proponents of Diderot, the philosopher, encyclopaedist and father of the Enlightenment, argue that he can no longer be excluded when Voltaire and Rousseau are inside.

There’s a strong faction for Germaine Tillion, an ethnologist and heroine of the Resistance who survived the Ravensbrück death camp. Tillion went on to campaign against concentration camps in the Soviet Union, and against torture and executions by the French in Algeria.

This being France, Pierre Brossolette has his detractors, mainly followers of Jean Moulin, another Resistance hero who was “Pantheonised” in 1964. “The hatred between the two men was so strong when they were alive that it would be indecent to impose a post mortem cohabitation,” says Pierre Péan, Moulin’s biographer.

Economies of scale
Hollande has promised an answer by year’s end. At the Brossolette seminar, the former prime minister Lionel Jospin – long Hollande’s boss at the Socialist Party – suggested it would be best to “honour one or two men and several women.”

A Pantheonisation ceremony costs up to €1 million, so a group admission would achieve economies of scale. But one can’t help wondering if it would cheapen the honour. And if women are among them, Hollande is likely to come under pressure to change the words engraved on the monument’s pediment: “To Great Men, the Nation Grateful”.