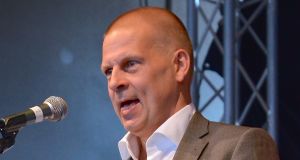 Sweden’s #metoo movement has come under attack after the suicide of its most prominent target. For 16 years Benny Fredriksson was artistic director of Stockholm’s Kulturhuset Stadsteatern, the city’s leading arts and culture centre.

Last December, Fredriksson, husband of Swedish opera star Anne Sofie von Otter, resigned after media reports that he sexually abused employees and had turned the theatre into his own personal “dictatorship”.

Sweden’s Aftonbladet daily accused him of pressing a woman to either have an abortion or forfeit a role. Another woman spoke of being forced to rehearse naked, while a third said the director suggested she work as a freelance for not taking on a role with sex scenes.

The paper quoted 40 unnamed people saying “everyone is afraid of him”, while in the rival Expressen he was called a “despot” and “a little Hitler”. The allegations against the 58 year old continued on social media after he resigned in December.

Last week in Sydney, accompanying his wife on singing engagements, he took his own life.

The news of his suicide has rocked his homeland, and raised questions about the reach – and aims – of the #metoo movement in Sweden. This week a city investigation which commenced after the allegations emerged found no evidence of sexual misconduct by Fredriksson.

On the contrary, the report presented in part on Tuesday said the claims against him – particularly the abortion allegation – were misleading.

“Benny abandoned his life’s work abruptly as a result of a boundless media campaign,” said Sture Carlsson, interim head of the centre. “It was both terribly sad and unfair. With him, it created a wound that could not heal. It’s a big tragedy.”

On December 4th, Sweden’s Aftonbladet published a major report into Fredriksson, after interviewing 40 people who had worked with him in the culture centre. Since Fredriksson’s suicide, however, the Aftonbladet has come under attack for the nature of its reporting.

Actor Karina Ericsson Wärn was interviewed by the newspaper but, after she had nothing negative to report, she said she was not included.

Another actor told Swedish broadcaster SVT how the Aftonbladet journalist “lost interest” in their interview when no negative stories were forthcoming. “This was a mob, they were looking for scandal,” said Leif Andrée.

The newspaper has stood by its reporting, saying it granted interviewees anonymity because many were afraid of reprisals – from the director or from within Sweden’s creative community.

It would be “nonsense”, the paper argued, “not to reveal bad behaviour just because it risked a hit to someone’s social standing”.

But it finds itself under attack for its report, in particular its claim Fredriksson “even forced an actor to have an abortion”. Instead it appears Fredriksson expressed regret that an actor would not be able to take on a role as she would be eight months’ pregnant by the premiere.

Asa Linderborg, Aftonbladet culture head, said it was “clear” he didn’t demand anyone to terminate a pregnancy. “This is a woman’s own responsibility,” she said.

A note attached to the article’s online version now flags its “misleading” nature. Friends and former colleagues of Fredriksson have stepped up pressure for resignations at the Aftonbladet.

“How can you respond to an accusation that you are a ‘dictator’? By saying: ‘No, I’m not a dictator’?” argued Jasenko Selimovic, a director and liberal Swedish MEP, in the Dagens Nyhter daily.

Anne Sofie von Otter has cancelled all singing engagements until further notice and has not commented on her husband’s death.

The suicide has not just dented Sweden’s progressive self-image. Far-right parties, already critical of the #metoo campaign, have cheered the blowback as an opportunity to undermine a feminist tradition rooted so deeply it is anchored in government policy.

The Fredriksson suicide has also catalysed growing criticism of Sweden’s energetic #metoo campaign from prominent Swedish women and feminists. Actor Noomi Rapace said her country’s #metoo campaign was problematic for choosing not to talk about the motivations of women making allegations.

“I am not for sale . . . but there are a lot of women playing the game and climbing the ladder to their advantage,” she said. “I saw it in Stockholm early on and I saw it in the film business in LA.”

The #metoo campaign had conflated bad behaviour with criminal behaviour, she said, and enabled a witch hunt against Fredriksson “that would make any trashy tabloid paper blush”.

His suicide, she wrote in the Svenska Dagbladet daily, “is what happens when you run your own trials in vulgar and hate-filled social media threads: you hang people”.

1 Covid-19: Public urged to ‘stay at home’ as 1,025 further cases confirmed in State
2 Transmission of Covid-19 on flight into Ireland linked to 59 infections
3 Man (21) charged with breaking into a house armed with an axe
4 Two hundred Irish retailers for all your online Christmas shopping
5 President signs Bill on mother and baby home records into law
Real news has value SUBSCRIBE