Greeks no longer want to be scapegoats for EU disunity

Letter from Greece: If EU-Turkey pact fails, Greece will be overrun by refugees again 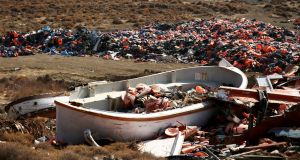 Lifejackets inside a wrecked boat used by refugees and migrants to cross part of the Aegean Sea from Turkey to Greece at a garbage dump site on the island of Lesbos. Photograph: Alkis Konstantinidis/Reuters

On March 25th last Greeks celebrated the 197th anniversary of independence. You might call it “virtual independence”, since it was the day when the war of independence began against the Turks in 1821.

Already, Greeks are discussing how they should mark the bicentenary in four years’ time. Independence from what? Out from under the boot of the Turks, into the arms of, first, the Bavarians, then the British and the Americans, and today back under the boots of the EU and the IMF.

On the same day, the remaining leaders of the EU’s 27 members celebrated a deeply divided unity which showed different and conflicting visions about the future of Europe and emphasised the disparate levels from which it has emerged.

Jeroen Dijsselbloem, the outgoing president of the Eurogroup, insulted the struggling southern members when he said the north had shown solidarity while the south was profligate and did not deserve help. Portugal and Italy demanded his resignation; Greece refrained. Dijsselbloem’s insult merely emphasised the north-south divide in Europe which can never be healed by attempts at unification.

But there is no longer merely a north-south split in the EU. Draw one line west-east from Bilbao to Istanbul and another north-south from Vipori to Corfu, and you have four Europes. In the north-west, the concentration of power and money; in the north-east, the former communist states, attempting to become western democracies and looking over their collective shoulder at Putin and Russia; in the south-west, the “bad boys” whom Dijsselbloem had in mind; and in the south-east, the southern Balkans with Greece at their centre, caught between the need to become a modern, westernised economy and their roots in levantine culture and traditions.

EU Council president Donald Tusk (disowned by his own country, Poland) exacerbated this division when he criticised his own organisation’s subscription to a “multi-speed” Europe. “Multi-speed” is a double-edged sword: it acknowledges the difference between cultures, economies, and even physical locations. At the same time it gives a voice to the “faster” northern states: “If you can’t keep up, drop out.” Add that to Dijsselbloem’s remarks and you have the recipe not for unity but a “Eurexit”.

So we are back in 1821. Turkey, long-time “sick man of Europe”, remains an ineradicable factor in Greek stability, with president Recep Tayyip Erdogan’s drive towards autocracy threatening to abrogate Turkey’s pact with the EU regarding the transit of refugees. The influx of refugees to Greece has slowed temporarily, but it will become a torrent again should that pact be broken.

Greece will once again be blamed for its porous borders and its inability to deal with asylum seekers, while member states in the north-east build walls to prevent refugee traffic. The more than 60,000 refugees currently in holding pens in Greece are helpless, but so is the Greek government. And it is becoming increasingly clear that aid organisations such as Médecins Sans Frontières and the Norwegian Refugee Council are running out of patience because their expert voices are not being heard. It’s called “donor fatigue”.

Should the EU-Turkey pact be rescinded, Greece this year will again be swamped by hundreds of thousands of refugees, adding to the existing chaos. Abu Mohammed, a smuggler who in 2015 made nearly a million dollars in human trafficking, will be back in business. So too will the manufacturers of faulty lifesaving gear, and so will the Greek coastguards, fishing corpses out of the Aegean.

The islanders’ tourism revenue will be wiped out, Greece will be accused by French and Dutch right-wing politicians of harbouring Islamic State terrorists, and more Turks will flee to Greece from Erdogan’s regime.

While national elections threaten instability in France and Germany, while political turmoil continues in Italy and Spain, issues like Brexit have to be seen in the light of a possible Frexit and a probable Grexit. The “unity” of Europe, like the “virtual independence” of Greece, both celebrated on March 25th, are concepts which have been defeated by both culture and history.

As a boy in the village said to me recently, “The Brits have the courage to do what we should do – leave!”

I sit at the end of the village street, looking across less than two miles of water at Albania; I wonder whether the post-Maoist state, dominated for almost 50 years by Enver Hoxha and his successors, and now struggling towards democracy and EU membership, hasn’t got it right. An economy in various shades of grey, dominated by former warlords, a culture that continues to embrace honour killings and the disenfranchisement of women, at least 6,000 dissidents who “were disappeared” and a diaspora causing havoc in Kosovo and Macedonia. It all seems to fit the pattern of a “multi-speed” Europe rather well.