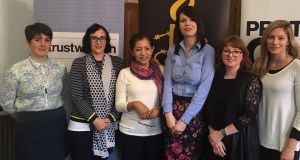 The Government must respond quickly to calls for the liberalisation of the State’s anti-abortion laws and not prioritise the wishes of the church ahead of Irish women’s health and safety, a reproductive rights campaigner has said.

Honduran activist Regina Fonseca travelled to Ireland this week to share her experiences of more than three decades of campaigning for abortion rights in a country where both abortion and emergency contraception are illegal.

A woman who avails of an abortion could spend up to six years in jail while a doctor who carries out the procedure could end up in prison for eight years.

Honduran women also face the harsh reality of living in one of the most dangerous countries on earth where gender-based murder, a phenomenon known as femicide, is widespread and a woman is assassinated every 16 hours.

Ms Fonseca, director of international advocacy at the Honduran Women’s Rights Centre, says hundreds of teenage girls, unable to afford the costs of travelling abroad for the procedure, put their lives at risks every year by undergoing backstreet abortions.

Many of those seeking an abortion have been raped or are in an abusive relationship, while others say they cannot afford to look after a child, according to the Women’s Rights Centre.

“Women in Honduras are seen as disposable and not important and do not have access to justice,” Ms Fonseca told The Irish Times. “There is total impunity for the men who commit these crimes of sexual violence.”

In Honduras, a woman reports being raped to the authorities every three hours, while in 2015, more than 900 girls under the age of 14 had clandestine abortions, according to the Honduran Women’s Rights Centre (Centro de los Derechos de Mujeres). Only those who can afford a return plane ticket to Mexico City can avail of abortion services abroad.

“Our politicians have created an environment where forced child pregnancy and forced motherhood is acceptable. It’s the young and the poor people who are suffering under these restrictive laws. They’re the ones choosing to have abortions in secret and putting their lives at risk.”

Ms Fonseca says the Citizens’ Assembly’s recommendations that abortion should be permitted in the State in a wide range of circumstances is an “enormous opportunity” for the Government to listen to the voices of the Irish people.

“The Government is here to represent the people, not the church, and thus must respect the wishes of its people.”