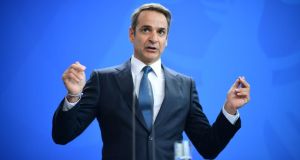 The 19th century American historian Henry Adams may have exaggerated when he called politics “the systematic organisation of hatreds”.

In a country like Greece whose folklore still retains aspects of a revenge culture, prime minister Kyriakos Mitsotakis and Alexis Tsipras (now leading the opposition) are doing by parliamentary and rhetorical means what they would previously have done with guns and knives. But today it represents political posturing rather than ideological difference.

Today’s political spectrum in Greece certainly shows the mutual distrust between two major groups: on one side, the parliamentary centre left and centre right, on the other the amorphous peripheral rainbow from the fascists (now expelled from parliament) to the anarchists, terrorists and hardline communists.

Greek society, epitomised by the 19th century city that is Athens, has striven to become bourgeois, espousing western values and manners

For a brief period, 2015-19, we had the unprecedented phenomenon of a government ostensibly dedicated to the politics of the Left.

The rise of Syriza (Coalition of the Radical Left) from 5 per cent of the national vote in 2007, and 27 per cent in 2012, to the point in 2015 where, on 36 per cent, it was able to form a government led by Alexis Tsipras, was an exponential learning curve for Greek politics, since the Left had traditionally been excluded from public life. For those years, the intellectual sat down with the cute hoor.

Since the beginning, Greek society, epitomised by the 19th century city that is Athens, has striven to become bourgeois, espousing western values and manners.

This trajectory is based on a “narrative” which is vigorously disputed throughout society. Neni Panourgia’s Dangerous Citizens: the Greek Left and the Terror of the State (2008) is required reading for an understanding of the demonisation of radical socialism.

The perennial polarisation is between those who call for a “new narrative” or “a paradigm shift” in governance and those determined to maintain the status quo of inaction and indifference which, coupled with graft and nepotism, cripples the work of the civil service, and protects the “closed” or “protected” professions, from architects to hairdressers, speech therapists to bakers.

The politics of left and right, urban and rural, modern and traditional, however feebly they may be reflected in parliament, exist beneath the surface of “political” life because the conduct of government and the economy masks the more radical (that is, grassroots) concerns of local life.

Despite rapid urbanisation, which includes the modernisation and gentrification of the villages, there is a very strong residual sense of rural and pastoral values.

Apart from the gross gender imbalance in his cabinet (less than ten per cent of senior ministers are women), Mitsotakis has surrounded himself largely with Athenian politicians and technocrats: of the 22 ministers, two-thirds are Athens-based, and half of those are unelected. They are almost entirely middle-class.

It was the 1981 declaration by New Democracy “We belong to the West” that polarised Greece more than any party-political alignment when it joined the then EEC. Greeks had to start choosing between modernisation and tradition, between an old identity and a new one. It is this vertiginous situation which bedevils the emergence of any new “paradigm”.

It is only in the areas of international politics and economics that the momentum of Greece towards the West is considered essential. Culturally and ethnically, the bias is towards the Balkans and the Levant which are themselves both east and west, and where much of Greece’s music, folklore, cuisine and vocabulary originates. “Anatolia” means both a geographical topos and “the rising of the sun”; it is one of the most emotive Greek words.

Many of the changes necessary to make Greece truly “modern” (meaning “westernised”) are resisted because the Greek character simply doesn’t see life in the same terms. It’s difficult for a civil servant living in northern Europe to understand why his southern counterpart has a different perspective on her work. The frustration and intolerance demonstrated by the IMF’s Poul Thomsen and his successors were provoked by this difference.

The social, commercial and legal systems, and the entire spectrum of how we see things, are the product of a culture where life is lived outdoors for most of the year.

The concepts of a welfare state, social security, and education differ from one climate to another, from one set of social constructs to another. And, essentially, from one way of life to another. The fragile concept of Greece as the home of philosophy and democracy is of less interest to Greeks than “eleutheria” (freedom), the family, honour and dignity, of which we see little in today’s parliament.