Greece votes No: Merkel, Hollande to meet to discuss crisis

Voters reject bailout, defying warnings ‘No’ result would set Athens on path out of euro 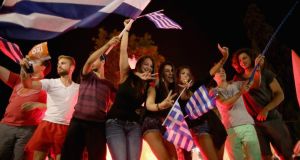 People celebrate in front of the Greek parliament as the people of Greece reject the debt bailout by creditors on July 6th, 2015 in Athens, Greece. Photograph: Christopher Furlong/Getty Images

The European Union entered uncharted waters on Sunday night after Greek voters emphatically rejected an international bailout, defying warnings that a No vote would set Athens on a path out of the euro.

Jubilant crowds converged on Syntagma Square, at the steps of the Greek parliament, as early results confirmed a No vote of more than 60 per cent.

They waved flags and cheered as television screens showed the map of Greece turn orange for No. Figures showed the Yes side drew less than 40 per cent support, with a turnout of 62 per cent.

With the European Union facing one of its gravest moments, German chancellor Angela Merkel and French president François Hollande will meet in Paris on Monday afternoon to discuss the crisis.

Greece’s immediate fate may lie with the European Central Bank, however. Its banks, which have been closed for the past week due to capital controls, are expected to run out of money within days unless the ECB provides an emergency lifeline.

The Frankfurt bank is due to hold a conference call this morning, but could be reluctant to increase emergency lending to Greek banks until Athens and its creditors agree a loans-for-reforms deal.

Greek prime minister Alexis Tsipras said Greece would return to the negotiating table with its creditors and signalled that he would look for commitments on debt relief.

The mandate you've given me does not call for a break with Europe, but rather gives me greater negotiating strength. #Greece #Greferendum

The Greek ppl responded to real question at hand: What kind of Europe do we want? The answer: A Europe of solidarity & #democracy. #Greece

“There are no easy solutions, only fair and viable ones, provided that both sides want it,” Mr Tsipras said in a televised address.

He said the referendum had banished the question of whether Greece should remain in the euro and said his government’s “immediate priority” was to restore economic stability and the functioning of the banking system.

As the results came in last night, finance minister Yanis Varoufakis said the decisive No vote was a vote in favour of democracy and social justice.

Speaking before a meeting with senior Greek bankers, Mr Varoufakis added: “As of tomorrow, Europe, whose heart is beating in Greece tonight, is starting to heal its wounds, our wounds. Today’s No is a big Yes to democratic Europe.”

The European Commission said it “took note of and respected” the referendum result.

It said commission president Jean-Claude Juncker would consult with “the democratically elected leaders of the other 18 euro zone members” and with the heads of EU institutions.

In Berlin, German vice-chancellor Sigmar Gabriel said Mr Tsipras had “burned the last bridge on which Europe and Greece could have moved towards a compromise”.

The resounding No vote was greeted as a triumph by Syriza, the radical left alliance that came to power on an anti-austerity platform in January. It said the result would strengthen its hand to secure a better deal from EU-IMF creditors after months of fraught negotiations on a financial aid package.

The Greek right was left reeling. Antonis Samaras, a former prime minister, announced he would step down as leader of the conservative New Democracy, having endorsed a Yes vote in the referendum.

Voting took place in extraordinary circumstances. For the past week the banks have been closed, commerce has slowed to a crawl and pension payments are being rationed. Greeks can each withdraw a daily maximum of €60, and there have been queues at ATMs.

European leaders had warned that a No vote would push Greece close to the euro zone’s exit door.

Opinion polls in recent months have shown a large majority of Greeks want to retain the single currency, but many No voters said they were willing to run the risk.

“I want [them] to negotiate more and make a better deal,” said economics student Thenia Mikalopoulou (22). “I think it’s achievable.” Mikalopoulou said she wanted Greece to remain in the euro zone but also sought “something better”.

Christos Retoulas, a public servant, said he voted No because the lenders were offering no relief on Greece’s massive debt burden. “Greece needs a deal that includes debt. Without a debt deal, you might as well throw money into a well,” he said.

The first shock waves from the referendum were felt in the currency markets, with the euro down against major currencies.