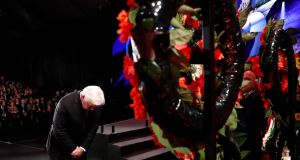 Israeli prime minister Binyamin Netanyahu has used the platform of the World Holocaust Forum in Jerusalem to denounce Iran as “the most anti-Semitic regime on the planet”.

Mr Netanyahu said the world turned its back on Jews during the Holocaust, teaching the Jewish people that under threat they can only rely on themselves. He vowed that Israel would always defend itself against those seeking to destroy it.

“Israel thanks president [Donald] Trump and vice-president Mike Pence for confronting the tyrants of Tehran who threaten the stability of the Middle East and the entire world,” Mr Netanyahu said. “I call on all governments to make any effort to confront Iran.”

This year’s gathering marked the 75th anniversary of the liberation of the Auschwitz death camp in Nazi-occupied Poland and coincides with a rise in anti-Semitic attacks across Europe and elsewhere.

Welcoming the world leaders to Jerusalem’s Yad Vashem Holocaust museum and memorial, Israel’s president Reuven Rivlin said their countries should not take for granted the common values that people fought for in the second World War, such as democracy and freedom.

“Jewish people remember because we understand that if we do not remember then history can be repeated,” he said. “Anti-Semitism does not only stop with Jews. Racism and anti-Semitism is a malignant disease that dismantles people and countries, and no society and no democracy is immune to that.”

German president Frank-Walter Steinmeier told the world leaders that 75 years after the liberation of Auschwitz, he stands before them as the president of Germany, laden with guilt.

Some 11,000 police officers were deployed in one of Israel’s biggest-ever security operations to ensure the gathering passed off peacefully.

Some Holocaust survivors complained that there was no place at the event for them. There was also a small protest against what was perceived as the lavish nature of the Holocaust forum while many of the survivors in Israel are struggling financially.