Official issues controversial warning amid surge in anti-Semitism in Germany 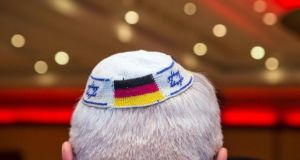 Germany’s top official responsible for efforts against anti-Semitism has suggested that Jews should not always wear their skullcaps in public. Photograph: Frank Rumpenhorst/AFP/Getty Images

Germany’s top official responsible for efforts against anti-Semitism suggested this weekend that Jews should not always wear their skullcaps in public, setting off a debate about balancing personal safety and the right to religious freedom in the country.

The recommendation by Felix Klein, a federal official, came amid growing evidence that, three-quarters of a century after the Holocaust, anti-Semitism is on the rise. In an interview published by the newspaper Die Welt and other outlets on Saturday, Mr Klein said his thinking on the issue had changed.

“I can’t tell Jews to wear the kippa everywhere in Germany, ” he said, referring to the traditional skullcap.

The remark suggested a sobering state of affairs in Germany, analysts said.

“When a representative of the federal government officially tells the Jewish community that ‘you are not safe against anti-Jewish hate everywhere in Germany’, then that is a pathetic display for the rule of law and political reality,” said Michel Friedman, a journalist and politician who has served as president of the European Jewish Congress.

Some rejected Mr Klein’s comments, with interior minister Horst Seehofer saying: “It would not be acceptable if Jews had to hide their faith in Germany.”

However, he also said: “Given the growth of anti-Semitic criminal offences, we must be worried and vigilant.”

Mr Klein said Sunday in a telephone interview with The New York Times: “I wanted to shake up the debate and am happy that it caused such ripples.” And to those who may hear surrender to anti-Semitism in his remarks, he added: “I don’t see it as resignation, but the exact opposite.”

A government report released two weeks ago showed that while politically motivated crimes were down generally in Germany, anti-Semitic crimes were up by 20 per cent.

Nearly 90 per cent of those episodes – which include internet posts and physical attacks – were linked to the country’s far-right groups, which appear to be growing more radical while not increasing in numbers.

Last year, a Syrian teenager attacked a man wearing a skullcap in the Prenzlauer Berg district of Berlin. The victim, an Arab-Israeli man who had worn the skullcap to show what Jews face, had filmed the attack, and his video was quickly picked up by the news media. – New York Times