Alabama woman shot while pregnant charged with death of foetus 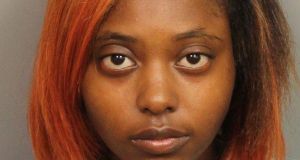 Marshae Jones: Alabama is among 38 states that have foetal homicide laws recognising the foetus as a victim in cases of violence against a pregnant woman, according to the US National Conference of State Legislatures. Photograph: Jefferson County Jail/Reuters

Marshae Jones was five months pregnant when she was shot in the stomach. Her foetus did not survive the shooting, which authorities say happened during a dispute with another woman. But on Wednesday, it was Ms Jones who was charged in the death.

Ms Jones (28) was charged with manslaughter and released from jail on Thursday after posting $50,000 (€44,000) bond, according to the authorities and the website of the Jefferson County Sherriff’s Office in Alabama. Police have said she was culpable because she started the fight that led to the shooting and failed to remove herself from harm’s way.

“The only true victim in this was the unborn baby,” Lt Danny Reid of the Pleasant Grove Police Department, said after the shooting in December, AL.com reported. “It was the mother of the child who initiated and continued the fight which resulted in the death of her own unborn baby.”

The unusual case comes amid a heated debate over the rights of pregnant women and foetuses across America, and Alabama is ground zero for the issue. In May, the governor signed a Bill banning abortion at every stage of pregnancy and criminalising the procedure for doctors, in what became the most stringent measure to prohibit abortion in the country. It is unclear if it will go into effect, but it sets up a direct challenge to Roe v Wade, the federal case that recognises a woman’s constitutional right to end a pregnancy.

Alabama is among 38 states that have foetal homicide laws recognising the foetus as a victim in cases of violence against a pregnant woman, according to the National Conference of State Legislatures. The law underpins the debate over abortion in that Alabama recognises a foetus at any stage of development as a “person” for criminal homicide or assaults, with an exception for abortion.

An Alabama supreme court justice challenged that exception in a recent opinion.

Soon after the arrest of Ms Jones, who is black, abortion rights groups came to her defence, citing the case as an example of the harsh treatment of people of colour and the criminalisation of pregnancy. In other cases, women have been charged for drug use during pregnancy or a car accident that resulted in the death of a foetus.

“This is how people – especially women of colour – are already being punished & having their pregnancies criminalised,” the National Abortion Federation, a professional association of abortion providers, said in a statement.

The Police Department in Pleasant Grove, a city of about 10,000 outside Birmingham, and the district attorney’s office in Jefferson County did not respond to requests for comment on Thursday morning. The police report and other records were not immediately available, and the details of the shooting were unclear.

AL.com reported that Ms Jones was shot in the car park of a Dollar General store in December, in what authorities said was a dispute with another woman over the father of the child. The authorities rushed her to a hospital, where she underwent surgery, according to the report.

The police initially charged the second woman, Ebony Jemison, with manslaughter in the death of the foetus. That charge was dismissed after the grand jury failed to indict her, according to AL.com. At the time, police said Ms Jones’ “involvement and culpability” would be presented to a grand jury to determine if she, too, should be charged.

“When a five-month pregnant woman initiates a fight and attacks another person, I believe some responsibility lies with her as to any injury to her unborn child,” Lt Reid said then. “That child is dependent on its mother to try to keep it from harm, and she shouldn’t seek out unnecessary physical altercations.”

The specific allegations about Ms Jones’s role in the dispute were unclear. She was being held in a Jefferson County jail on Thursday morning. The Yellowhammer Fund, which provides funding for abortion access in Alabama, said it was working to get Ms Jones out of jail and provide her with a lawyer.

The organisation tweeted her story with a message: “Losing a pregnancy is not a crime.” – New York Times