‘White saviourism’ under scrutiny after child deaths in Uganda 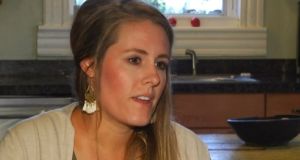 Renee Bach: the case against her is being brought by two mothers whose children died. They say they were led to believe Bach was a ‘medical doctor’ and her home was a ‘medical facility’

A legal case against an American missionary accused of causing the deaths of children under her care, while she posed as a medical practitioner, has raised a debate about foreign aid workers and “white saviourism” in Uganda.

Renee Bach, a Christian from Virginia, travelled to Uganda in 2007 at the age of 18 and founded the organisation Serving His Children, in Jinja, a southern town home to the source of the Nile. Its website describes the organisation as a “God-breathed and directed ministry working to end malnutrition in families and communities”.

The case against Bach is being brought by two mothers whose children died. In case documents, they say they were led to believe she was a “medical doctor” and her home was a “medical facility”.

Bach was often seen wearing a white coat, a stethoscope and regularly administered medication to children in her care, they say. It was only after their children died they discovered Bach had no training in medicine and her facility had been ordered to close amid allegations of medical malpractice.

In a statement released through her lawyer, Bach said she never represented herself as a doctor or a nurse, but “learned skills to help provide assistance as necessary; and she often assisted nurses and other healthcare professionals to serve in crisis situations”.

In a now-deleted blog post – recovered by the advocacy group No White Saviours, which has been highlighting the case – Bach previously wrote about treating children. “I hooked the baby up to oxygen and got to work . . . I took her temperature, started an IV, checked her blood sugar, tested for malaria, and looked at her HB count . . . After doing a search for blood around Jinja town, we found her type and it was a match! We started the transfusion . . . ”

The Kampala-based Women’s Pro-Bono Initiative is representing the Ugandan women, who say their children were among many who died under Bach’s care.

“These mothers lost their children as a result of Renee’s and Serving His Children’s illegal and unethical conduct,” Primah Kwagala, Women’s Pro-Bono Initiative chief executive, told The Irish Times.

“They want Renee to be stopped from providing any medical services, they want her punished for her past conduct in monetary terms and for [the] court to declare that her actions led to violations of their human rights including the right to life, health, abuse of their dignity, discrimination on the basis of race and social standard.”

A lawsuit has been adjourned until 2020.

While Bach’s lawyers dispute that she ever came into contact with either of the children who died, one of the challenges with the case is that Serving His Children didn’t keep proper records, according to Kwagala.

“It’s common knowledge that Renee – not being a medical professional – never kept records, she had no idea what should and what shouldn’t be recorded. The court will look at the evidence on court record to decide if her assertions are true or not.”

David Gibbs, attorney for Bach and Serving His Children, and president of the US-based National Centre for Life and Liberty, said he believed more than 100 children had died since Serving His Children began operating, but said this was not due to malpractice, and many were already very sick when they came in for treatment. Some were referred on to hospitals, he said.

Bach will “vigorously defend” her non-profit and her own name, Gibbs said, while denying claims she is hiding in the US to avoid these allegations. “If that requires her to attend trial she will do that.”

In an interview with The Irish Times, he said it was possible the group wanted to affect donations and “create fear, doubt and panic”.

Kelsey Nielsen, co-founder of No White Saviours, denied this. “In order for them to win this case, one of the only plausible strategies they have is to paint Renee as the victim of a ‘character assassination’,” she said.

“Like Renee, I am also a white American woman who travelled to Uganda with a great deal of passion and good intentions. I can understand and relate to how Renee started off but ever since I was made aware of the severity of what she was doing, I have only wanted to see a proper legal process and investigation take place.”

Nielsen said one of the reasons the group is publicising this case is because Serving His Children is still operating in Uganda.

Her co-founder agreed. “People have taken Africa to be an experimental grounds where you can come and do anything and walk away . . . without anyone holding you accountable,” Alaso Olivia Patience told Al Jazeera. “If it was a black woman who went to any part of the US or Europe and did this they would be in jail right now.”

Bach is far from the only foreigner to garner attention in Uganda due to allegations of maltreatment of locals. In May, the Guardian revealed that a British man and US pastor had been involved in giving a bleach-based “miracle cure” to as many as 50,000 Ugandans.

Robert Baldwin and Sam Little were accused of distributing the mixture, known by advocates as MMS or Miracle Mineral Solution, to villagers through churches, giving local pastors smartphones in exchange for assisting them.

They allegedly claimed the industrial bleach could cure diseases including cancer and Aids.

Little (25) was arrested in Uganda five days later, while Baldwin, who is in the US, denied distributing the bleach and told local media he was being demonised.

“All I wanted to do is help people using natural healing therapies,” he said.

If the allegations are substantiated, Little “must face the law”, said a spokesperson for the Ugandan ministry of health. “Samples of the chemical concoction have already been obtained by Uganda National Drug Authority and security agencies for testing.”

1 Coronavirus: Ireland should ‘look seriously’ at closing borders to keep new infections out
2 'The last time I saw her was when she was being put into the ambulance'
3 People should carry ‘evidence’ of travel reasons if exceeding 2km limit
4 Coronavirus: ‘Fundamental shift’ in electricity use, says Eirgrid
5 Trump boasts of coronavirus ‘ratings’ as top expert warns of up to 200,000 US deaths
Real news has value SUBSCRIBE