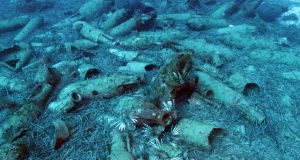 Amphorae at the shipwreck site off the coast of Protaras, Cyprus, on Wednesday. Photograph: Spyros Spyrou/via Reuters

An ancient wooden ship complete with cargo has been discovered off the eastern coast of Cyprus near the resort town of Protaras. The ship belongs to the period after Rome annexed the island in 58 BC.

“This is the first undisturbed Roman shipwreck ever found in Cyprus, the study of which is expected to shed new light on the breadth and scale of seaborne trade between Cyprus the the rest of the Roman provinces of the eastern Mediterranean,” the Cypriot antiquities department said.

Amphorae in and around the wreck identify the ship as a merchant vessel that transported cargo between Syria and the southern coast of modern Turkey, known in ancient times as Cicilia. Amphorae are narrow necked pottery jars used by Greeks and Romans for storage and shipment of oil and wine.

The Cypriot antiquities department announced the find by two volunteer divers working with the Maritime Archaeological Reserarch Laboratory (MARElab) of the University of Cyprus. A MARELab team accompanied by students and volunteers is at the site to document the ship and protect it from looters while the department prepares to conduct a preliminary investigation.

The effort is the first underwater project to be fully financed by the Cyprus government, which praised the role of volunteers in the discovery and protection of the site. Their actions, said the authorities, send “an optimistic message regarding the protection of cultural heritage by Cyprus society”.

A mid-4th century Greek ship discovered in 2007 off Cyprus’s southern coast near the town of Mazotos is considered to be one of the region’s best-preserved wrecks. It has yielded information on ship construction and artefacts that provide insights into life during the height of classical Greek civilisation.

The 500 wine amphorae from this ship are believed to have come from the Greek island of Chios.

Among the other items found were three anchors, olive pits and timbers. Archaeologists reported last year that both Greek and Phoenician navigation methods were employed on the vessel, linking technologies of two maritime eastern Mediterranean people.

The first and most famous of Cyprus’s ancient shipwrecks, known as the “Kyrenia ship”, was discovered off the northern coast in 1965 by a Greek Cypriot diver. This was an early 3rd century wooden Greek cargo vessel carrying wine amphorae from Rhodes and thousands of almonds transported in jars within the hull.

It is believed that ship sailed from the Greek islands of Samos, Kos and Rhodes before sinking in rough seas off the Cypriot port of Kyrenia.

The ship was recovered, preserved and exhibited in a museum in Kyrenia castle, where it remains on display in the northern area of Cyprus occupied by Turkey in 1974.