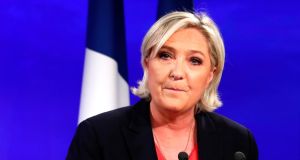 Plans to rename and “profoundly transform” the Front National after Marine Le Pen’s defeat by Emmanuel Macron in France’s presidential runoff will meet resistance and could expose a potentially damaging divide in the far-right party, members and analysts have said.

Le Pen hailed her score of 10.6 million votes, 33.9 per cent of the total and the highest ever recorded by the party, as “massive and historic” on Sunday night. But it has disappointed activists and some senior figures who had set a target of at least 40 per cent as the measure of a successful campaign.

Key parts of the FN’s strategy, including its anti-EU stance and bid to expand its appeal beyond its far-right base, could face scrutiny as the party heads towards parliamentary polls next month that Le Pen has said she hopes will make the FN, with the help of alliances, “the main force of opposition” to the new president.

“It’s about opening the doors to other personalities,” said Briois, the mayor of the FN’s northern bastion Henin-Beaumont. Philippot said the party was going to “change into a new political force, which necessarily will not have the same name”.

Le Pen has led a determined and partly successful effort to detoxify the party and improve its racist, jack-booted image since ousting its founder, her father Jean-Marie, in a bitter family battle in 2011. But not all in the party approve of the direction in which she and Philippot have taken it.

Marion Marechal-Le Pen, Marine’s niece and one of the FN’s two MPs, said last week a score of “at least 40 per cent” in the runoff could be considered a success. On Monday she said the party had “plainly failed to convince the French people. That’s something we will have to reflect on in the coming weeks.”

Marechal-Le Pen heads a more socially conservative, free-market right wing of the party in southern France. Closer to the views of her grandfather, it focuses on defending French identity and traditional values and is opposed to the more overtly statist, broad-based approach of Philippot’s northern faction.

Party activists have told French media they were disappointed by Le Pen’s failure despite a raft of factors in her favour including Islamist terror attacks, Europe’s migration crisis, persistent high unemployment and an internationally minded former investment banker running against her.

Some are also openly questioning Philippot’s strategy of trying to broaden the party’s appeal by seeking support not only from the nationalist right but also the anti-capitalist left, as well as its policy of withdrawing France from the euro and possibly the EU, which polls have shown to be unpopular with voters.

Robert Menard, the FN-backed far-right mayor of Beziers, told RTL radio: “Thirty-five per cent is not a disappointment, it’s a defeat. The FN needs to stop talking about abandoning the euro, that has been a mistake, a colossal mistake.”

Despite widespread dissatisfaction among members with her performance in last week’s TV debate, in which she fumbled facts and spent more time mocking Macron than explaining her own policies, Le Pen is thought unlikely to face a challenge for the party’s leadership.

“The Front National is a family party, and very legitimist. But the strategy she has adopted and its principal architect, Florian Philippot, could well be questioned.”

Jean-Marie Le Pen, who was expelled from the party in 2015 but remains its honorary president, said bluntly on Monday that Philippot was “one of the main people to blame” for his daughter’s defeat. He said his daughter should have spoken of “real problems, mass immigration”, not Europe and the euro.

Le Pen Snr also said he would not “allow the Front National’s name to disappear like that”. There would be a party conference and “the members will decide. It’s not up to Mr Philippot”. Bruno Gollnisch, another FN elder statesman, said it was imperative the party “preserve its traditional convictions”.

How damaging the FN’s divide finally proves will largely depend on its performance in next month’s parliamentary election. Some FN officials have reportedly set the bar at 50 seats in the 577-seat assembly, perhaps aided by alliances with smaller right wing groups.

France’s two-round electoral system – and the republican front that has traditionally united right and left to keep the far right out of power – could make that difficult to achieve. Some polls suggest the party could end up with about 15 MPs.

“Anything less than 20,” Gombin said, “and there will be people calling for Philippot’s head and a new direction for the party.”

1 One hundred Irish retailers for all your online Christmas shopping
2 Thousands of gardaí mount checkpoints and patrol parks, beauty spots
3 Life under Level 5: Where can I go, who can I see, what is closed and what is open?
4 Covid-19: Pressure over breakdown in tracing system intensifies as State enters Level 5
5 Nearly 400 Brazilians have tested positive for Covid-19 in Ireland, data shows
Real news has value SUBSCRIBE