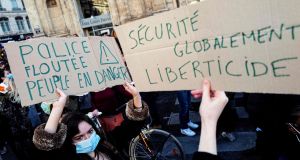 Three police officers who were filmed beating a black music producer in Paris during a violent arrest have been put under formal investigation, ratcheting up pressure on the government to backtrack on a draft law that would restrict the right to publish images of security forces in action.

Prosector Rémy Heitz on Sunday said the officers would be transferred to criminal court and held in custody while the investigation continued into the alleged assault of Michel Zecler at his music studio on November 21st.

The incident was publicised by online media outlet Loopsider on Thursday in the same week that the French parliament was debating a new “general security” law proposed by president Emmanuel Macron’s government.

Critics have said the provision on filming the police, article 24, goes too far to restrict freedom of the press in the name of protecting officers from intimidation.

The draft provision would make it a crime, punishable by a year in prison and a €45,000 fine, to “publish, by any means and in any medium, the face or any other identifying feature other than their official identity number” of a police officer or gendarme “with the manifest aim of causing them physical or psychological harm”.

Demonstrators came out en masse on Saturday in cities from Paris to Lyon, despite a month-old Covid-19 lockdown, in opposition to the proposed law. Many were galvanised by the video of Mr Zecler, and some carried signs reading: “Your weapons, our cameras”, “I am Michel Zecler” and “Let us film, Let us breathe”.

The minister of the interior estimated crowds of 133,000 nationally, while organisers claimed 500,000. In Paris, there were 46,000 demonstrators, according to officials.

The largely peaceful protests rivalled the size of the gilets jaunes movement’s early protests in 2018. But small groups of people burnt cars, destroyed property and threw stones at the police. About 46 people were arrested in Paris, according to officials, and 98 police officers were injured nationally.

The security law is the latest of several government edicts and pieces of legislation introduced by Mr Macron in recent months to tackle crime and terrorism before and after a series of incidents, including the beheading of a teacher by an Islamist terrorist in October and a knife attack in Nice.

Interior minister Gérald Darmanin has been pushing for article 24 to address police unions’ concerns about officers’ identities being revealed online or harassment.

French media organisations and leftwing politicians argued the amendment was written too broadly, and that its real purpose was to stop the media from examining incidents of police brutality.

The video of Mr Zecler’s arrest came only days after another incident on Tuesday, when police were filmed using harsh tactics to dismantle a camp of tents set up at Place de la République in Paris by migrants and activists to protest against lack of accommodation for the homeless.

Mr Darmanin was quick to condemn what happened to Mr Zecler, saying he would request the officers be dismissed once an investigation was done. “They have sullied the uniform of the Republic,” he said.

Mr Heitz said the officers would be charged with committing intentional violence with weapons, using racist language, falsifying police records and invading and damaging private property. A fourth officer who allegedly threw a tear-gas grenade into the music studio is also being placed under formal investigation, but will not be held in custody.

“They eventually admitted that the beating was not justified and they reacted out of the fear they felt in the constrained space of the entry way” of the music studio, said Mr Heitz, adding that the officers accuse Mr Zecler of resisting.

Hafida El Ali, Mr Zecler’s lawyer, said on BFM Television that her client was “relieved by the decision” and was resting to recover from his injuries.

In an interview with the Journal du Dimanche, Frédéric Veaux, who leads the national police force, said he was “shocked” by the Zecler video, as were “all of the members of the police in this country”. He said he could not make a definitive judgment while the inquiry continued, but added the public could count on the police to “treat the events with extreme severity once those responsible have been identified”.

Mr Veaux pushed back on the idea there was a wider problem with the police force. “For me, the relationship between citizens and the police has not been wrecked,” he said.