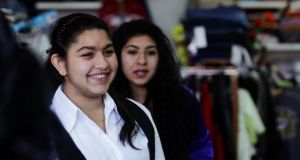 Leonarda Dibrani shops in the town of Mitrovica in Kosovo on Saturday. French President François Hollande said Dibrani, a 15-year-old schoolgirl whose expulsion from France has sparked uproar, could return to pursue her studies but without her family, a compromise that followed criticism from left-wing allies. Photograph: Reuters/Hazir Reka

It has become a familiar pattern. An event sparks demonstrations and a media frenzy. President François Hollande waits for days while tension mounts, then goes on television to announce a compromise solution, which prompts further criticism of him.

Leonarda Dibrani, a 15-year-old Roma schoolgirl, was arrested and expelled from France with her parents and five brothers and sisters. Her plight has monopolised headlines since the case became known on October 14th.

Thousands of lycée students demonstrated and interior minister Manuel Valls – the main target of protesters – was forced to cut short a journey to Martinique and Guadeloupe.

Mr Valls, who expelled 13,510 foreigners from France in the first eight months of this year, had allowed the “sanctuarisation” of schools to lapse. Accounts of the schoolgirl weeping as she was removed from a bus during a school outing triggered the emotional public response.

Refused asylum
The Dibrani family had been refused asylum seven times and were sent to Kosovo, whence they claimed to have originated.

A report by the government inspector general found that Leonarda’s father Resat had a police record for theft and for beating his children. In nearly five years in France, neither he nor Leonarda’s mother Gemilja learned French nor sought work.

Contrary to the false documents he submitted to French authorities, Mr Dibrani was the only one from Kosovo; his wife and six children were born in Italy.

Two-thirds of opinion poll respondents said the Dibranis should not be allowed to return to France. Fewer than half – 46 per cent – said they were shocked by the manner of Leonarda’s arrest.

Mr Hollande knew that if he did not allow the Dibranis to return to France, a vociferous minority on the French left would be angry. But if an exception were made for the Roma family, it would be a boon to the right-wing opposition.

In the event, Mr Hollande announced a compromise solution in a televised address on Saturday. Leonarda would be welcomed back to France, without her family. The “sanctuarisation” of schools was restored by a government advisory. “Schools must be preserved from the conflicts of society,” the president explained.

The Journal du Dimanche described the episode as “a soap opera that turned into farce”. In Mitrovica, the Dibranis were besieged by French journalists, who enabled them to listen live to Mr Hollande’s speech.

“I’m not going back alone,” Leonarda told television cameras. “And my brothers and my sister, don’t they go to school? We’ll travel around Europe, like before, and we’ll go back to France.”

Harlem Désir, the leader of Mr Hollande’s own socialist party, said all the children and their mother must be allowed to return. The ecologists called Mr Hollande’s position “inhuman and incomprehensible”.

“Shame on François Hollande,” said the conservative deputy Bruno Le Maire. “He sends a disastrous message of weakness to those who’ve been legitimately expelled . . . Hollande has irremediably weakened his authority.”

Lycée student unions have promised to resume their demonstrations on November 5th, after the All Saints holiday break.