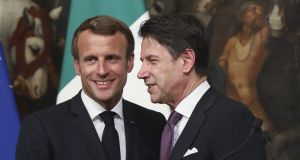 Emmanuel Macron, France’s president, speaks with Giuseppe Conte, Italy’s prime minister, after a press conference ahead of their dinner at the Palazzo Chigi in Rome. Photograph: Alessia Pierdomenico/Bloomberg

French president Emmanuel Macron’s short trip to Rome on Wednesday night ended the 15 worst months in Franco-Italian relations in recent memory, and signalled the possible creation of a “Franco-Italian axis” that could rival France’s close co-operation with Germany.

Mr Macron is the first European leader to call on Italian prime minister Giuseppe Conte since Conte formed a new government early in September. The French president also made a courtesy call on president Sergio Mattarella who, in the words of an adviser to Macron, “was the guarantor of historic ties through moments of doubt or difficulty in the Franco-Italian relationship”.

Earlier this week, Mr Macron advocated a more strict French immigration policy, which brought him closer to the Italian position. His talks with Mr Conte focused on the search for “a stable and automatic mechanism” to deal with vessels carrying migrants in the Mediterranean.

Mr Macron also called for “a shared position so that all [EU] countries participate in one way or another” in sharing the burden of migration “or be penalised financially”.

Mr Macron regretted the “injustice” suffered by Italy because of its proximity to the Middle East and Africa. “I don’t underestimate what the Italian people have been through,” he said. “The response to migration is efficient European co-operation, not turning inward.”

Mr Macron emphasised the need to rapidly repatriate migrants who do not qualify for asylum because they are fleeing economic hardship rather than political persecution.

In the hope of forestalling a recession in Europe, France and Italy advocate economic stimulus, in particular investment in the transition to clean energy. Both are critical of Germany’s large budget surpluses.

The two most important economic portfolios in the new EU Commission that will take office on November 1st are held by a French woman closely allied with Mr Macron and a like-minded former Italian prime minister.

Syvie Goulard is in charge of investment, the internal market, growth and industry. Paolo Gentiloni is responsible for macroeconomic questions and the euro zone.

The newfound harmony between Paris and Rome is the result of Matteo Salvini’s eviction from the Italian government. As interior minister in the previous government, the leader of the far-right Lega frequently clashed with Mr Macron.

When Mr Salvini closed Italian ports to migrants, Mr Macron denounced the “leprosy” of nationalism. Mr Salvini had flaunted his friendship with the French far-right leader Marine Le Pen and exhorted the French to free themselves of “a very bad government and a very bad president”.

Mr Salvini precipitated a government crisis in August in the mistaken belief it would lead to new elections that he could win.

Instead, former sworn enemies in the centre-left Partido Democratico and Five Star Movement forged a new coalition excluding the Lega.

Mr Conte remained as prime minister, but abandoned the anti-EU policies of the previous government. On September 11th, he made his first official visit to Brussels, and he has expressed his desire to work closely with France, Germany and the EU.

Paris greeted Mr Salvini’s departure with an immense sigh of relief, albeit cautiously. Though he has been humbled by his fall in opinion polls, Mr Di Maio has been appointed Italy’s foreign minister.

And Mr Salvini is sure to be a troublesome leader of the opposition. In late July, he posted a rude video in which he accused Mr Macron of being a Napoleon who orders Europeans about. “The Italians are not ready to be anyone’s servants or slaves,” Mr Salvini said. At a rally on September 8th, he repeated his new slogan, in French, Italian and English: “The Italian people are nobody’s slaves.”

To avoid giving credit to Mr Salvini’s accusations that the new government is “enslaving” itself to France or the EU, Mr Macron went to Rome, rather than inviting Mr Conte to Paris. The two men dined at the Palazzo Chigi, the seat of the Italian government, rather than at the French embassy. The trip was deliberately short, so that France will not appear to be the power behind a government which is at odds with Mr Salvini.

With the UK’s departure from the bloc, Italy will be the third-ranking power in the EU. Its transformation from an anti-EU government dominated by populist nationalists to a pro-EU government is a godsend for Mr Macron.

Yet the Élysée continued to emphasise the instability of Italian politics, and the fact that Mr Macron’s battle against “illiberal democracies” is ongoing.

“This is a very divisive political debate between nationalist, anti-European forces which we believe to be dangerous . . . and political forces who want to strengthen European co-operation,” the Macron adviser said. “We have no illusions about the fact that this extends far beyond the Italian framework.”