EU’s choice for chief prosecutor a snub to Romanian government 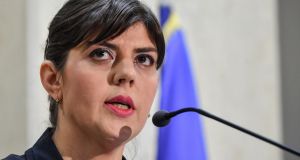 Laura Codruta Kovesi: During her five years as head of the Romanian Anti-Corruption Directorate she put 68 high-level functionaries on trial. Photograph: Daniel Mihailescu/AFP/Getty

In a notable snub to the Romanian government, the EU on Thursday agreed to confirm Laura Codruta Kovesi (45) as the newly created European chief prosecutor.

The nomination, strongly supported by MEPs, had been contested by the socialist-led government in Bucharest, which had sought to discredit Ms Kovesi in her role until last year as head of the Romanian Anti-Corruption Directorate.

During her five years in the job she put 68 high-level functionaries on trial, including 14 government ministers or former ministers and 53 deputies from both houses of the Romanian parliament.

By the time she was forced out of the job by the governing Social Democrats, 37 of those politicians had already been convicted, and most of the other cases were ongoing.

Eventually, after a long battle, the government forced the president to fire her last July. She was accused of abusing her office and overusing wire-tapping facilities from the secret services; her district prosecutors were accused of pressuring witnesses.

Ambassadors meeting on Thursday voted by a majority for her nomination to the new EU job – the secret ballot was an indicative vote, which will be followed by a formal vote once negotiations with the European Parliament, which also supported Ms Kovesi, are finished.

The European Public Prosecutor’s Office, which will be tasked with investigating and prosecuting corruption, cross-border VAT fraud and crimes against the EU budget, will begin its work by the end of 2020.