Severe flooding caused by heavy rainfall in the Georgian capital Tbilisi has led to the death of at least twelve people, damanged houses and roads and set loose zoo animals. Video: Reuters 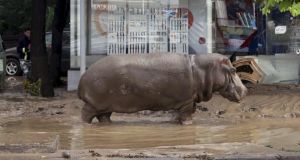 A hippopotamus walks across a flooded street in Tbilisi. Photograph: Beso Gulashvili/Reuters 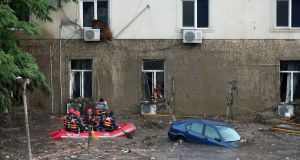 A runaway bear sits at second-floor window on a flooded street in Tbilisi. Photograph: EPA

Georgian police were last night searching the mud-clogged streets of the capital, Tbilisi, for animals that escaped from the city’s zoo during flash floods that killed at least 12 people and left more than 20 missing.

Dozens of animals fled the zoo as a torrent of water tore through the city from the normally tranquil Vere river, which burst its banks after heavy rain and became a deadly wave of sludge that swept away walls, trees, cars and anyone caught in its path.

Dead lions, tigers and less exotic animals were found at the devastated zoo, but big cats and wolves were also among the creatures that were let loose in the city of 1.1 million people.

A crocodile was pictured swimming down one road; a bear was photographed clambering up the side of an apartment building, his hind legs on the window ledge and his front paws on an air-conditioning unit; and a hippo was cornered on another street and shot with tranquilliser darts.

Several animals were killed by police marksmen, including a rare while lion and six wolves found prowling the grounds of a children’s hospital.

“Not all the animals that ran away from the zoo have been captured. Therefore, I want to ask the people to refrain from moving about the city,” said Tbilisi mayor David Narmania.

At least three people died at the zoo, including two staff.

“The search for animals continues, but a large part of the zoo is simply non-existent. It was turned into a hellish whirlpool,” said Mzia Sharashidze, a spokeswoman for the zoo.

The flood is believed to have caused more than €15 million in damage to infrastructure, including housing and roads that were completely or partially destroyed.

Emergency officials said that a landslide had blocked part of the Vere river, causing a large volume of water to accumulate and then burst through the barrier, wreaking havoc downstream.

“Nothing like this has ever happened in Tbilisi before,” said prime minister Irakli Garibashvili, who visited the affected areas and said security and emergency officials were “working around the clock” in response to the disaster.

“Dozens of families remain homeless as their houses were destroyed or damaged in the capital,” he said.

Georgia’s armed forces were ordered to assist wherever necessary in Tbilisi and today was declared a day of national mourning.

Federica Mogherini, the European Union’s foreign policy chief, said the bloc “stands in full solidarity” with Georgia in this hour of need and was ready to “deploy assistance”.

The United Nations refugee agency said its Tbilisi office was on standby to assist the emergency response if necessary, and Mr Garibashvili said several countries including Turkey and Ukraine had offered to help. Mikheil Saakashvili, the former Georgian president who is now governor of Ukraine’s Odessa region, said: “My heart breaks when I see the pictures from Tbilisi.”

Patriarch Ilia II, the head of the influential Georgian Orthodox Church, said the country’s former communist rulers were ultimately to blame for the disaster.

He said in his Sunday sermon: “When the communists occupied Georgia and started repressions against Christians and the clergy and destroyed churches and monasteries, they ordered church bells to be melted, the metal sold and a zoo to be built with that money.”

The zoo “cannot flourish in that location,” he said.

“It must be moved somewhere else. A sin never goes without punishment.”