Proposals are illegal and contrary to constitution, says law society ahead of election 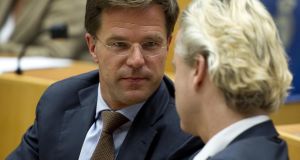 Mark Rutte (left), leader of the Dutch liberal party, and Geert Wilders, leader of the right-wing PVV: they pulled out of a leaders’ TV debate planned by broadcaster RTL, because five parties instead of four were asked to take part. Photograph: Valerie Kuypers/AFP/Getty Images

In a sobering analysis of the political mood less than a month from the general election, the Dutch law society has found that five of the main political parties have pledged to take measures that are “openly discriminatory”, illegal, and contrary to the constitution.

The analysis of the parties’ election manifestos confirms the view that several of the larger parties – including, most notably, prime minister Mark Rutte’s Liberals – have been forced to talk tough on immigration in a last-ditch bid to compete with Geert Wilders’s far-right Freedom Party.

Two separate opinion polls during the week found that although there’s been a dip in support for the Freedom Party, it remains on course to emerge as the largest in the country after March 15th – with 26 seats in the 150-seat parliament compared to 23 for the Liberals, its nearest rivals.

The analysis by the Nederlandse Orde van Advocaten (NOvA) found there were discriminatory proposals in the manifestos published by the Freedom Party, the Liberals, the Christian Democrats – who are competing for third place and could be a vital component in any new coalition – the free-market VNL and the ultra-orthodox Protestant SGP.

Those unacceptable proposals were “openly discriminatory against certain population groups”, said a commission of lawyers, judges and legal academics set up by NOvA.

They reflected “unacceptable attitudes” on the part of the parties involved – and “a considerable increase” in the level of discrimination found in the parties’ manifestos before the 2012 election when only two parties were found to have been at fault.

Ironically, the reason the other main parties say they won’t form a coalition with Mr Wilders after the election is because of his conviction last December for inciting discrimination against the country’s Moroccan population.

In the case of all five parties, the issues on which they overstepped the mark, said NOvA, were immigration, refugees, Islam, jihadism and terrorism.

In the case of the Freedom Party, its one-page manifesto wants to close mosques, ban the Koran and end immigration, particularly from Muslim countries. The Liberals have promised they’ll make those who join jihadist groups stateless, which is contrary to Dutch and international law.

The Christian Democrats say they’ll ban foreign funding to mosques. The VNL wants to “de-naturalise” dual nationals with a criminal conviction. And the SGP – which opposes votes for women and sees homosexuality as a sin – says it will oppose what it calls “the radical excesses of Islam”.

“If those charged with the protection of our democratic state are willing to undermine the rule of law itself, then that is a threat to the freedoms that are the foundations of our society,” the commission warned.

Last week, Mr Rutte and Mr Wilders pulled out of a leaders’ TV debate planned by broadcaster RTL, because five parties instead of four were asked to take part. RTL responded by cancelling the debate but has now revived it as a debate between those vying for third place: the Christian Democrats, Labour, D66, GreenLeft, and the Socialists.