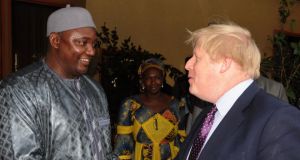 Gambia’s new president, Adama Barrow, will be publicly sworn in on Saturday in a ceremony marking the west African country’s emergence from more than two decades of authoritarian rule.

Having initially accepted the result, Mr Jammeh changed his mind and attempted to cling on to power, before fleeing to Equatorial Guinea in January under threat of military intervention by neighbouring state members of the African Union.

Mr Barrow had in the meantime left Gambia, amid concerns for his security, and was inaugurated as president at the Gambian embassy in Senegal on January 19th. He will take a second oath of office at Saturday’s public event at Independence Stadium in the Gambian capital, Banjul.

The event takes place days after Mr Barrow’s government informed the United Nations that the country would remain in the International Criminal Court, reversing the previous administration’s plan to withdraw from the tribunal.

Mr Jammeh announced in October that he would pull Gambia out of the ICC, accusing the world body of ignoring alleged war crimes of western nations and seeking only to prosecute Africans.

“As a new government that has committed itself to the promotion of human rights . . . we reaffirm the Gambia’s commitment to the principles enshrined in the Rome Statue of the International Criminal Court,” said a statement read on state television and radio.

The announcement constitutes a rare victory of late for the embattled tribunal. South Africa and Burundi also signalled last year they would quit the ICC and African Union member states earlier this month endorsed an unspecified “strategy of collective withdrawal”.

In another sign of Mr Barrow’s intention to break with his predecessor, police opened their first investigations this week into unresolved deaths and disappearances under Mr Jammeh.

Mr Jammeh came to power in a coup in 1994 and his government established a reputation for torturing and killing opponents. He has denied these allegations. The initial investigation ordered by Mr Barrow will focus on at least 30 people whose family members reported them dead or missing, police inspector general Yankuba Sonko told reporters in Banjul.

The police also opened a complaint register so that additional people can file reports.

1 Love in a time of Covid: John and Mary marry over 40 years after first meeting
2 Two hundred Irish retailers for all your online Christmas shopping
3 Big Phil is being very big about his former boss’s Covid quarantine trip
4 Father unaware partner and baby dead until gardaí called to raise alarm
5 Coronavirus: Close contact numbers fall in sign restrictions may be working
Real news has value SUBSCRIBE