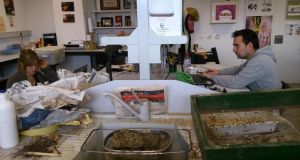 Volunteers at the Association for the Recovery of Historical Memory laboratory in Ponferrada. In common with her colleagues, Nuria Maqueda (left) is unable to find paid employument and now works full-time as a volunteer identifying mass graves containing anonymous victims of the civil war. Photogragh: Guy Hedgecoe 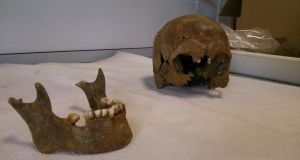 The skull of a victim of the Spanish civil war, at the Association for the Recovery of Historical Memory laboratory in Ponferrada. Photogragh: Guy Hedgecoe


Nuria Maqueda is carefully cleaning the dirt off a bone with a small, fine-toothed brush. She still doesn’t know the sex of the person it belonged to or how old they were when they died – a forensic expert will confirm those details at a later date. But she does know that he or she was killed during Spain’s 1936-1939 civil war, before being thrown into a mass grave.

“This is an arm bone,” Maqueda explains, as she brushes encrusted mud off it on to an old newspaper. “These remains are from an exhumation we did in 2012 near here in a place called El Grillo. We dug up the bodies of 10 people.”

She is working in a small laboratory in Ponferrada, in northwestern Spain. Like so many young people in Spain, she and her two colleagues in the laboratory cannot find paid work. Instead, they have thrown themselves full-time into the painstaking, unpaid task of identifying mass graves containing anonymous victims of the civil war and the ensuing reprisals carried out by the right-wing dictator Francisco Franco, who governed from 1939 until 1975.

It’s a huge task, with some estimates putting the number of Franco victims who are still in mass graves at 150,000. But the volunteers who do it receive minimal official support and rely on donations for funding.


Gaze averted
“Amnesty International says that we are the second country in the world, behind Cambodia, in terms of missing people and yet our government is looking the other way,” says Emilio Silva, president of the Association for the Recovery of Historical Memory, which oversees the exhumations.

Silva has done more than anyone to keep alive the debate over Spain’s violent past. In 2000, he organised the first scientific exhumation of a mass grave, that of Priaranza del Bierzo, near Ponferrada, where 13 people were shot dead in 1936. One of them was his grandfather, a local trader whose crime was to sympathise with the leftist Republican government which was resisting the rebellion led by Gen Franco.

“It’s a political problem,” Silva adds. “Still today, the Spanish institutions and the main political parties – the Popular Party [PP] and the Socialists – have a great tolerance towards the memory of Franco’s regime.”

He gives examples, such as the streets still named after Franco and his allies – one road in Madrid commemorates Gen Juan Yagüe, who became known as “the Butcher of Badajoz” after he oversaw the massacre of thousands of civilians in the southern city. The biggest reminder is the Valley of the Fallen, a huge mausoleum in the hills north of Madrid where Franco is buried beneath a huge stone cross, the highest of its kind in the world. For Silva, this is the equivalent of Germany maintaining monuments to Hitler and funding them with public money.

The Socialist Party, now in opposition, insists it has tried to change this, having introduced a historical memory law in 2007 which sought to remove most tributes to Franco, such as statues, and give “moral redress” to his victims. However, that law was eventually watered down so much that it is seen as having had little impact, other than riling the political right.

But 75 years after the civil war ended and four decades after the dictator’s death, pressure is building on Spain from beyond its own borders to change its handling of the legacy of Franco.


Buenos Aires extradition
In September, an Argentinian judge, María Servini de Cubría, ordered the extradition to Buenos Aires of four officials from the Franco regime, so that they could face charges of torture. The move was a response to a legal request filed by Spanish relatives of victims, who believed their own country’s justice system had failed them by refusing to investigate. In recent weeks, Judge Servini de Cubría has been taking testimonies from relatives via videoconference as she continues her investigation.

Two of the four officials are dead. But the other two are still alive, including former policeman José Antonio González Pacheco. Nicknamed “Billy the Kid”, he was particularly sadistic when interrogating detainees, according to a number of his victims from the early 1970s.

“He enjoyed it, it was like a hobby for him,” Luis Suárez, who was tortured for being a member of a Communist group, told El País newspaper.

Spain’s judiciary has so far not co-operated. Neither González Pacheco, nor the other official named in the Argentinian extradition request, Jesús Muñecas Aguilar, has been extradited.

Meanwhile, a United Nations working group has called on the Spanish state to assume responsibility for helping victims’ families and to roll back the amnesty law which still protects those who violated human rights during the Franco era.

Earlier this year, UN special rapporteur on the promotion of truth, justice, reparation and guarantees of non-recurrence, Pablo de Greiff, spent 10 days in the country investigating.

“What concerns me the most is the distance between victims and the state,” he said last month. He compares Spain’s handling of its historical memory unfavourably with Argentina, where the state has been closely involved in helping relatives of victims of the military dictatorship and pursuing those responsible.

“In Argentina there are so many court cases under way that the issue has become normalised. Trials are no longer considered newsworthy,” de Greiff added. “There is a sector here [in Spain] that thinks this should not be discussed because underlying hatreds will rise to the surface again. But nothing leads me to believe this is true.”

The conservative government of Mariano Rajoy firmly believes that the past should remain buried. In opposition, his PP opposed the 2007 historical memory law and, since coming into power, has eliminated state funding for the Association for the Recovery of Historical Memory. The PP argues that leaving the past behind helped Spain make the successful transition from dictatorship to democracy in the late 1970s. It sees the recovery of historical memory, therefore, as a dangerous and pointless exercise.


Past as trap
In a bitter congressional debate on the issue recently, the justice minister, Alberto Ruiz Gallardón, faced accusations of letting down the relatives of Franco victims. In response, he said his critics were “trapped in the past”.

But as Spain’s handling of its violent 20th century comes under increasing scrutiny, there is a feeling that although the divisions of the past have been buried, they remain very close to the surface.