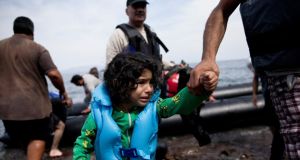 A young migrant girl is helped ashore as she arrives with others aboard a dinghy after crossing from Turkey to Lesbos island, Greece. Photograph: Petros Giannakouris/AP Photo

As millions of Syrian refugees languish in packed refugee camps in Turkey, Lebanon and Jordan, the EU’s announcement of a relocation plan for 120,000 asylum-seekers arriving in Europe seems pitifully inadequate.

But it’s a start. Wednesday’s proposal by the European Commission and, more importantly, the promise of a permanent system to be triggered in crisis situations, represents the most significant shake-up of EU asylum policy in years. The concept of mandatory quotas for member states could set an important precedent for how the EU deals with asylum issues in the future.

The migration crisis has exposed the lack of a common EU approach to immigration. Years of dithering and deferral on migration policy, as member states clung possessively to their own prerogatives despite the obvious need for a shared asylum policy across a common travel area, have had disastrous consequences.

The past few weeks have revealed deep divisions about how to handle the migrant crisis, and have opened up a potential divide as newer EU member states from the East continue to resist quotas.

A key challenge will be how the commission monitors and regulates the redistribution scheme once it is operational. An obvious flaw is that many refugees may not want to settle in the member state to which they are assigned.

And even if refugees are moved to their assigned member states initially, it will be difficult to ensure that they do not simply move on to another one, given the EU’s lack of internal borders.

Ensuring that the preferences of refugees participating in the relocation scheme are taken into account – for example, permitting people to join family members in a specific country – might prevent such problems.

The commission has also proposed that member states introduce reporting obligations on relocated persons to ensure they legally remain in the country, a measure that will likely prove controversial.

Another weakness of the proposals is that some member states may choose not to take part, even if political backing for a mandatory system is given by EU justice and interior ministers next Monday in Brussels.

In this scenario, member states would be fined up to 0.002 per cent of GDP and the money ring-fenced for other countries participating in the scheme.

The third and more immediate problem will be securing the political support needed for the deal. For those hoping for a swift EU response to the crisis, comments by commission president Jean-Claude Juncker Wednesday were worrying.

Juncker expressed hope that EU justice ministers “would at least be able to agree to the main points of the proposal” on Monday, but appeared pessimistic about the possibility of securing final agreement at the meeting.

The spectre of a protracted EU battle over the fine print of the Juncker migration plan would do yet more damage to the EU’s already bruised reputation on migration.

The real elephant in the room is the status of the Dublin regulation. A cornerstone of EU asylum policy, the rule obliges refugees to apply for asylum in the country where they first arrive.

Germany’s move last week to accept migrants who had not registered with Hungarian authorities on arrival in the EU has sounded the death- knell for the Dublin regulation, which has existed in various incarnations since the early 1990s.

The decision by Danish train operator DSB to cancel all trains between Germany and Denmark on Wednesday after police stopped hundreds of asylum seekers arriving by train across the border, again highlights the confusion.