Europe will need migrants in the future, so why is it shutting them out?

Opinion: ‘Recent moves in some EU member-states to criminalise those who help refugees make matters worse’ 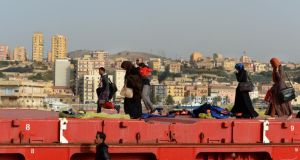 ‘Most of the two to four million irregular migrants in Europe have lost their documented status because of exploitation, administrative delays or misinformation rather than because they have broken any law.’ Above, migrants arriving at Porto Empedocle in Sicily after being rescued approximately 40km off the Libyian coast by a Dutch freighter the Dinteldijk. Photograph: Frank Miller / The Irish Times

It matters what we call the millions of migrants struggling to enter or stay in Europe out of despair over conflicts and persecutions in their homelands. It is all too easy to say “illegal” instead of economic, irregular or undocumented migrants. But that is to criminalise and dehumanise these people from the start, ignoring international law, violating due process and disregarding established human rights.

Most of the two to four million irregular migrants in Europe have lost their documented status because of exploitation, administrative delays or misinformation rather than because they have broken any law. Nor did the majority of them arrive seeking refugee status by boat, notwithstanding the dramatic recent reportage of such traumas in this newspaper and other media. They mostly came first as workers, tourists or spouses and then became irregular (see www.undocumentary.org).

Documentation is the key factor here. The obverse of internal mobility on the continent – now taken so much for granted by business travellers, tourists and students through the Schengen area and the European Union – has become the external enforcement of entry controls. Internal freedoms defined by social security numbers are thereby combined with an external fortress by visas and passports. The resultant mix of migration and security issues deeply confuses economic, demographic and refugee policies and trends. Policy at EU level is contradictory, fragmented and ineffective, as Peter Sutherland argues persuasively in his United Nations role on migration (see iiea.com).

Recent moves in some EU member-states to criminalise those who help refugees make matters worse. The Lampedusan islanders who welcomed huge numbers of refugees and then were penalised for their efforts are mirrored in the Italian state’s humanitarian rescue policy of Mare Nostrum only to have its plea for solidarity spurned by other EU member-states. No wonder the islanders and the state wave the refugees through to go elsewhere.

The great Italian investigative journalist Fabrizio Gatti has vividly documented these facts in the weekly L’Expresso and in his book Bilal recounting undercover reportage of refugee journeys and migratory workers’ exploitation on southern Italian farms. He spoke last weekend in Conversano, in the Puglia region of Italy, at the annual meeting of the Eurozine network of European cultural journals (see Eurozine.com).

Having experienced heavy emigration historically the region was in a better position to understand and absorb the huge influx of Albanian economic refugees in the 1990s, before receiving so many arrivals from Africa and the Middle East. Gatti pitched his narrative around a Syrian neuro-surgeon whose whole family was on board the boat that sank last year. Having been victimised there, in Turkey and Libya he put his life savings into getting them to Europe in search of work in Sweden, which has the best record of receiving Syrian refugees, along with Germany, Italy, France and the UK. Since Lebanon, Turkey and Jordan have taken in millions of Syrian refugees these European efforts are puny in comparison.

And when put against European Commission estimates of a 25 million demographic shortfall in the ageing EU labour force by 2020 they look irrational as well. Why victimise those who desperately want entry when the EU’s 500 million population is falling so fast? And when this is exacerbated too by austerity-induced emigration from newly peripheral economies such as Ireland, Lithuania, Italy, Spain and Greece? And what of the need for skilled and unskilled workers throughout these economies?

A Swedish expert on these migration issues, Peo Hansen, acknowledged these tensions but highlighted two other tendencies: a desire by governments to control access to jobs by “just in time” circular migration which would not accumulate residence rights as before, facilitating a neoliberal labour market; and a growing race anxiety – mentioned by other speakers too – discriminating between whites and people of colour which distinguishes European reactions from those of the United States.

Immigration therefore raises previously taboo subjects of racism and reopens the politics of multiculturalism at a time of resurgent populist nationalism on the right. Eve Geddie, an Irish advocate of immigrant rights in Brussels, told the meeting that local communities, city administrations and regions like Puglia often handle these issues more progressively than national governments.

Media, too, are a key bridge between localities and policy-makers. Sutherland points out that OECD research shows immigrants do not take jobs from locals, have less unemployment and rely less on social security. They are also much less numerous than most believe. If media reported these facts more accurately there would be less prejudice against them, as UK studies also show.